SEOUL, Korea – January 30, 2022 – Samsung Electronics Co., Ltd., a Worldwide Olympic and Paralympic Partner, is bringing innovative mobile technology to Beijing 2022 to help athletes and fans unite around their sporting and personal passions. In partnership with the International Olympic Committee and International Paralympic Committee, Samsung’s campaign will promote the power of sport, bringing together the global community in new and innovative ways, and enhancing the Olympic experience through its immersive, state-of-the-art technology.

“As a longtime partner of the Olympic and Paralympic Games, Samsung has been by the side of athletes for over 30 years to support their dreams and empower meaningful connections with fans and their loved ones through innovative technologies” said Stephanie Choi, Executive Vice President and Head of Global Marketing Team of Mobile Experience Business, Samsung Electronics. “Our contributions will elevate Beijing 2022 experiences to athletes and global fans in a unique and more exciting way.”

Today, Samsung has unveiled its digitally centered marketing initiative for Beijing 2022 which includes the announcement of Team Samsung Galaxy athletes, Virtual Media Center, Virtual Samsung Olympic Games Showcase in the Galaxy House on Zepeto and #CheerTogether campaign. The announcement also provides details of its limited-edition Galaxy Z Flip3 5G Olympic Edition, which will be distributed to all Olympic and Paralympic athletes.

Samsung highlights mobile innovation with Galaxy Z Flip3 5G Olympic Edition
As the exclusive wireless communications equipment provider of the Olympic and Paralympic Games, Samsung will again gift special edition mobile devices to all Olympic and Paralympic athletes at Beijing 2022. The exclusive Galaxy Z Flip3 5G Olympic Edition will enhance the athletes’ experience and allow them to stay connected to family, friends and fans throughout the Games allowing them to capture memories and the excitement around the Games.

Additionally, the Samsung mobile devices provided during the Olympic and Paralympic Games will give information required for athletes at Beijing 2022. It contains all the next generation features you’d expect with Samsung’s latest Z Flip innovation including the latest camera features for capturing and sharing memories, and Samsung Knox which is industry-leading security platform for secure mobile experience.

Galaxy Z Flip3 5G Olympic and Paralympic Edition features a slick white body with gold metal frame and the respective Samsung and IOC, or Paralympic composite logo inscribed on the back. 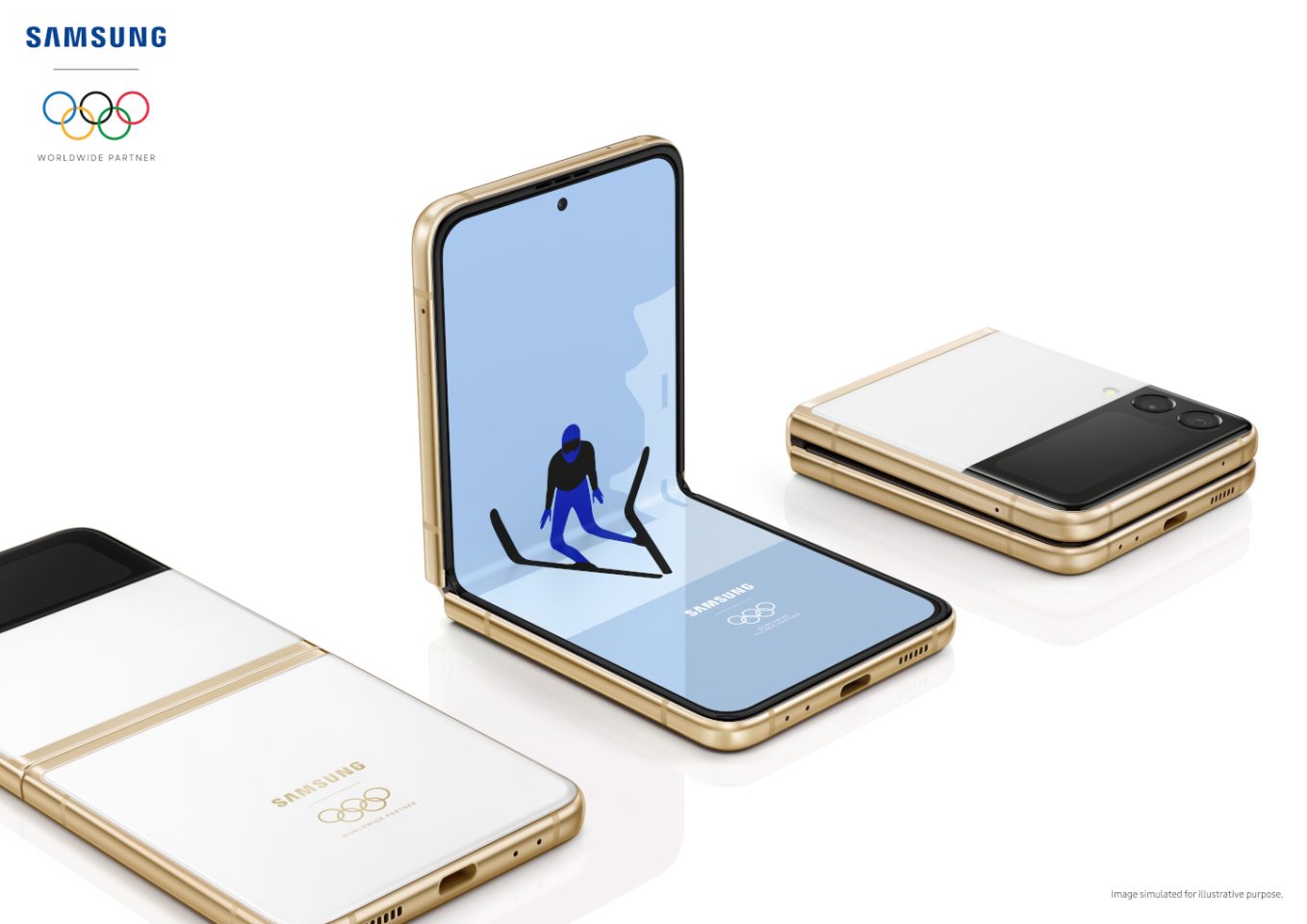 Team Samsung Galaxy to unite diverse passions and unfold new possibilities and connections
Team Samsung Galaxy, Samsung’s roster of Olympic hopeful athletes, is a representation of Samsung’s commitment to creating a global team of athletes which is United by Passion’ and reflects the Olympic spirit.

For Beijing 2022, Samsung has partnered with 15 world-class athletes – representing nine nations and various sports - who defy barriers and inspire fans through their athletic achievements and “off-field” contributions to their communities.

Throughout Beijing 2022, Team Samsung Galaxy athletes will serve as ambassadors to Samsung’s United by Passion’ campaign. Team Samsung Galaxy will showcase their own unique Passion Stories’, which illustrate how they came to be the athletes they are today and the personal passions that have shaped them outside sport.

Samsung to provide digital centric technology to empower Beijing 2022 experience
Continuing Samsung’s digital-first approach from Tokyo, Samsung has launched a virtual experience to share the latest news, information and interactive content to bring fans and media closer to the games and celebrate Beijing 2022.

The Samsung Galaxy Beijing 2022 Virtual Media Center will include real-time information for media and fans including a Press Center which offers daily games time news and press materials. The Galaxy Showroom spotlights Samsung’s latest products, including the new Galaxy Z Flip3 5G Olympic edition, and offers a preview into what will come next for the brand. In the #SharingBeijing2022 area, media and fans can experience, capture and share on-site buzz as well witnessing the launch of Samsung’s #CheerTogether campaign, which allows fans to cheer on their favorite athletes with the power of Samsung Galaxy. Also on Samsung Health app, fans can join in with a joint digital challenge with Samsung and the IOC called #StrongerTogether, which allows fans to feel the power of becoming stronger together by participating in group walking.

In addition, Samsung will run its Samsung Olympic Games Showcase during Beijing 2022. As part of this, Samsung has launched its new pin promotion, offering athletes and fans the chance to receive limited edition pins to commemorate the games. The Samsung Athletes Lounge will also return for athletes, with several on-site activities running to bring fun and entertainment to the games. Further boosted through technology, the Virtual Samsung Olympic Games Showcase has virtualized the Samsung Olympic Games showcase in Salitun. This virtual platform lets users experience a visit to the Salitun Showcase and enjoy new virtual experiences including a virtual pin promotion1.

Timo Lumme, Managing Director, IOC Television and Marketing Services said: “Samsung’s technology, innovation and commitment will allow fans and media from around the world to globally unite through a shared passion, and experience the Olympic Winter Games Beijing 2022 up close and in real-time, safely and securely.”

About Samsung’s Involvement in the Olympic Games
For over 30 years, Samsung has been part of the Olympic Games movement. The brand’s connection with the Olympic Games began in Seoul 1988 as a local partner and grew into a Worldwide Olympic Partnership during Nagano 1998. The Olympic Partner Program, known as “TOP,” is the highest level of Olympic partnership and features 15 brands, including Samsung, with global category exclusivity. Additionally, starting with the Paralympic Winter Games Torino 2006, Samsung has supported seven consecutive Paralympic Games, and is proud to continue its commitment through Olympic and Paralympic Winter Games Beijing 2022. Samsung is the official wireless devices and computing equipment provider of the Olympic and Paralympic Games. More information on Samsung’s Partnership with the International Olympic Committee can be found here: https://olympics.com/ioc/partners/samsung

About Samsung Electronics Co., Ltd.
Samsung inspires the world and shapes the future with transformative ideas and technologies. The company is redefining the worlds of smartphones, wearable devices, tablets, digital appliances, network systems, and memory, system LSI, foundry and LED solutions. For the latest news, please visit the Samsung Newsroom at http://news.samsung.com 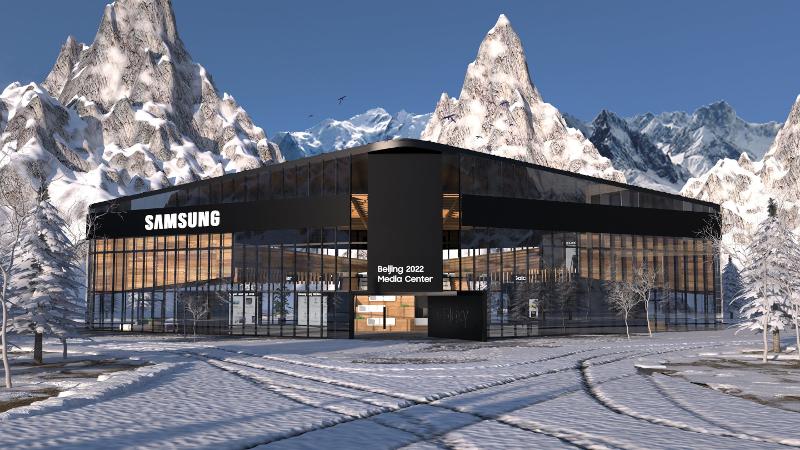 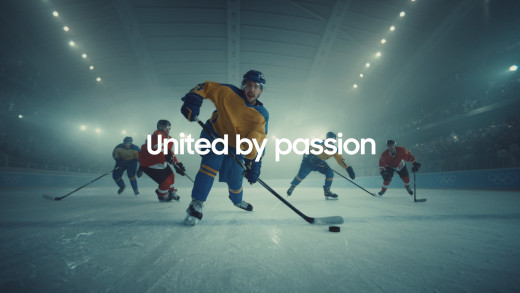