Samsung Announces Winners of Competition for the Next Galaxy Designs

The shortlisted entries of Samsung and Dezeen’s competition for mobile accessory and wallpaper designs are showcased at SDC19, with two grand prizes awarded during the event

Included among the many exciting announcements that made day one of the Samsung Developer Conference (SDC19) particularly memorable were the reveals of the winners of Samsung and leading design magazine Dezeen’s competition for mobile accessory and mobile wallpaper designs that enhance users’ experiences of next galaxy mobile devices.

The Samsung Mobile Design Competition attracted entries from up-and-coming designers and creators from around the world, and featured $40,000 in prize money. The top three finalists in both the Next Mobile + Product Design and the Next Mobile Wallpaper Paradigm Graphic Design categories were invited to attend SDC19 in San Jose, California, where mock-ups of their designs are currently on display and, yesterday, grand-prize winners were announced.

Out of a pool of finalists that included several entries inspired by the beauty of nature, the grand prize in the Next Mobile Wallpaper Paradigm category went to Kalle Järvenpää of Finland’s eye-catching Garden of Galaxy design. The grand prize in the Next Mobile + category was awarded to André Gouveia, Nuno Pires and João Pereira of Portugal’s Star of Galaxy – it is designed for a robotic stand that turns any Samsung Galaxy device into a collaborative countertop smart assistant with Bixby.

“At Samsung, whether it’s through hardware or software, we’re constantly exploring ways to take users’ experiences with their Galaxy devices to the next level,” said Lee. “Hosting this competition, and attracting the talents of gifted designers, allows us to do just that. We look forward to creating more opportunities for creators to shape the next wave of Galaxy experiences.”

Read on for a closer look at each category’s shortlisted and winning entries.

The idea behind Kalle Järvenpää’s wallpaper design is that each Galaxy device comes with a seed from which a unique flower sprouts. Each flower’s appearance is based on a combination of randomly generated “genes” and the user’s environment. They grow bigger with time – no tending necessary – and users can even share clippings with friends to create beautiful and unique gardens.

Andre Cardoso designed his wallpaper concept around the idea of bringing people closer at a time when face-to-face interactions are becoming increasingly scarce. Each device essentially has its own color, and when users come together, their wallpapers begin to blend until they eventually show the same hue.

Guan Hong Yeoh’s wallpaper design is a visual representation of energy in motion. Inspired by nature, his design features colorful organic forms that create beautiful geometric patterns based on ambient sounds and the time of day. As he explains, the design “manifests new experiences of being engaged with natural elements, and brings the invisible nature into the magic of Galaxy.”

Star is a robotic stand with an articulated structure that’s designed to charge and hold Bixby-enabled mobile devices. Capable of tilting and rotating 360 degrees, the stand allows the devices to follow and assist the user via face and voice recognition – adding new levels of comfort and flexibility to things like video conferencing, cooking, recording video and more.

Fellas of Galaxy transforms Samsung’s Galaxy Watch into an interactive toy that can sing songs, tell stories and more to entertain the user’s child. The adorable dock – resembling a pig, bear, deer or crocodile – protects and charges the smartwatch, and allows its display to act as an expressive mouth for each Bixby-powered character.

BELT of Galaxy by Alexander Rehn and Tobias Saller (Germany)

Alexander Rehn and Tobias Saller’s accessory, which they call BELT, was designed to help users of all ages maintain a comfortable grip of Galaxy mobile devices. The loop, which locks easily into place with a clip, can help prevent young and old users, who may not have the muscle endurance or strength to maintain a constant hold of their smartphone or tablet, from accidentally dropping their devices.

Let’s Hear from the Winners

After accepting their respective awards, Kalle and André shared their thoughts on what taking part in the Samsung Mobile Design Competition meant to them. 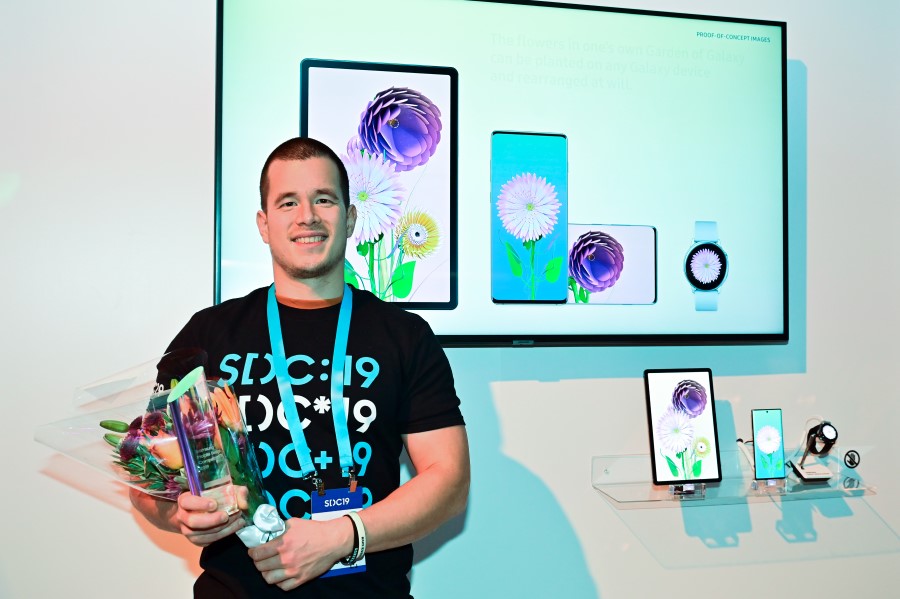 “It’s a great opportunity to work with a company the size of Samsung,” said Kalle. “If by some chance you managed to get something that would be on, let’s say even one tenth of the Galaxy devices out there, it would be awesome!” 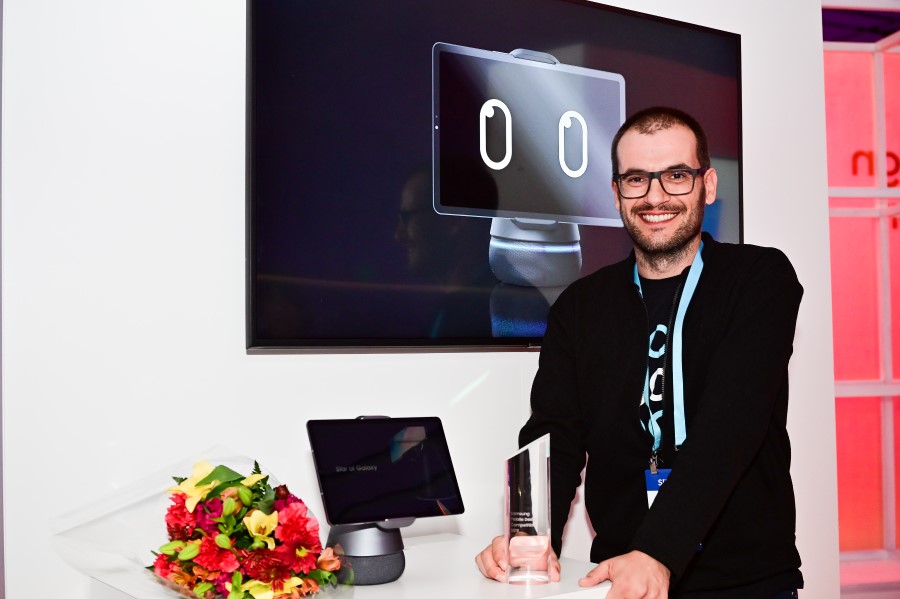 André described the prospect of working with a company like Samsung as a key motivator to bring Star to life. He hopes his team’s creation will be produced and put on the market soon. “We are here to make that dream come true,” says André. 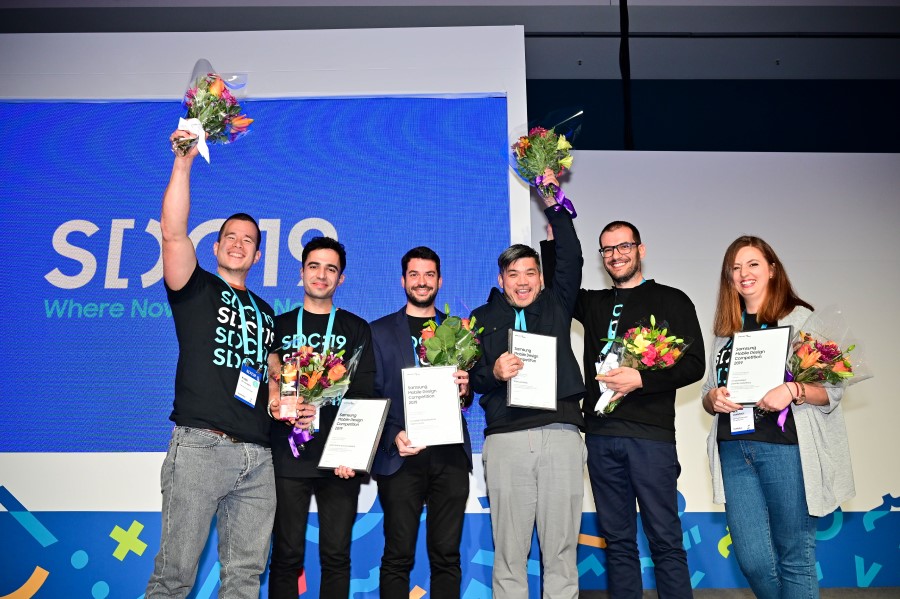 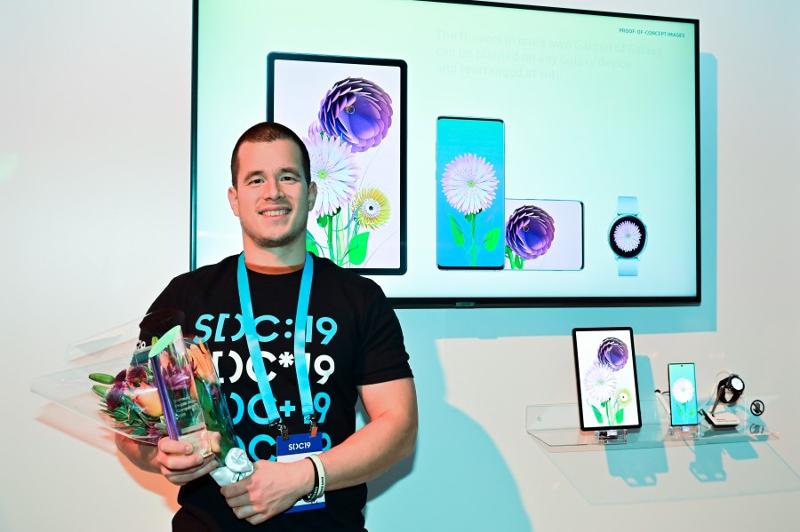 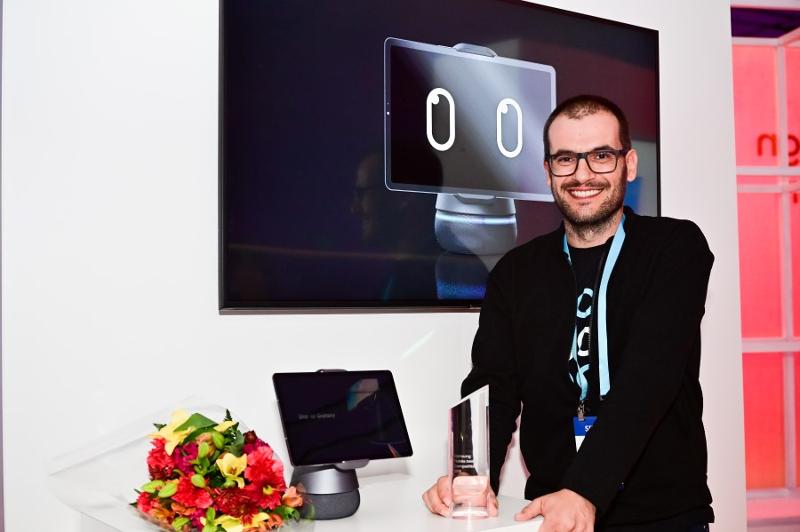 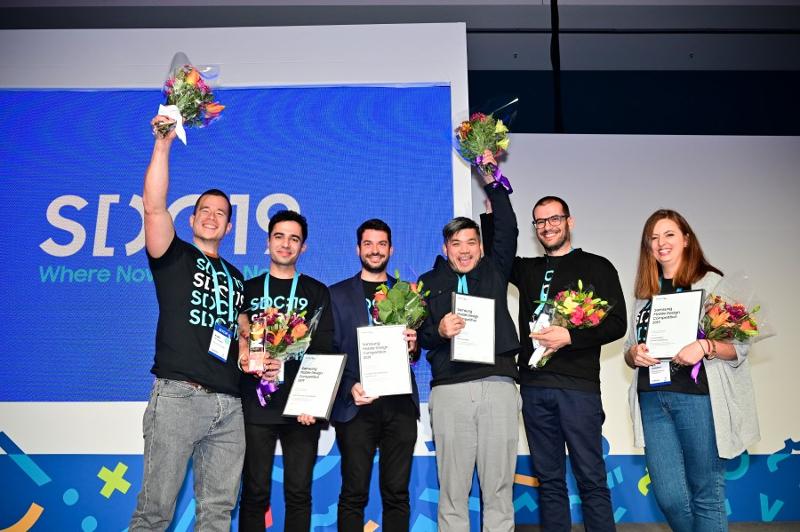 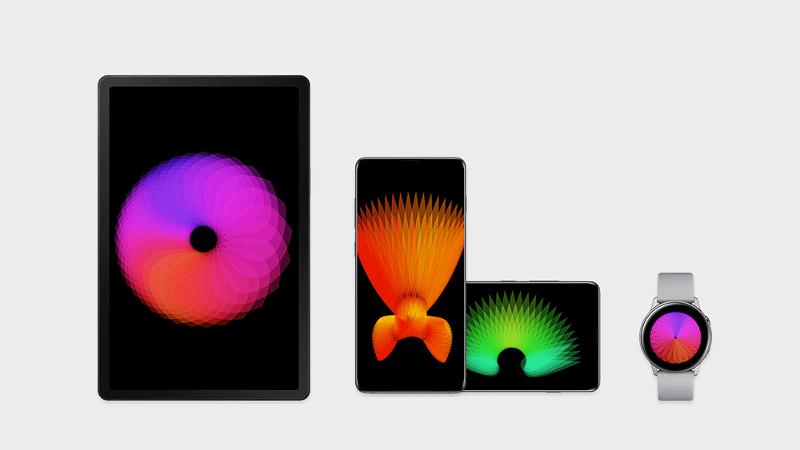 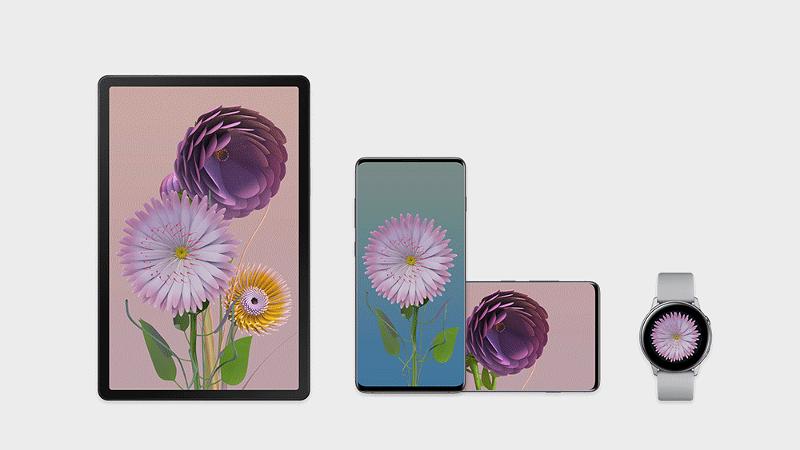 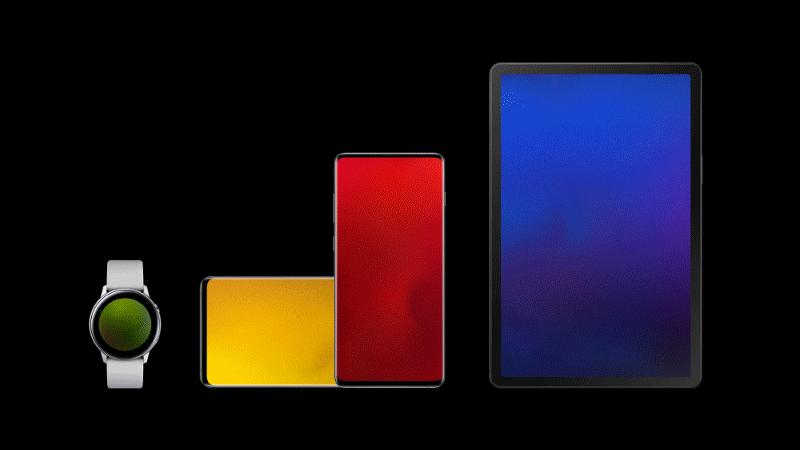 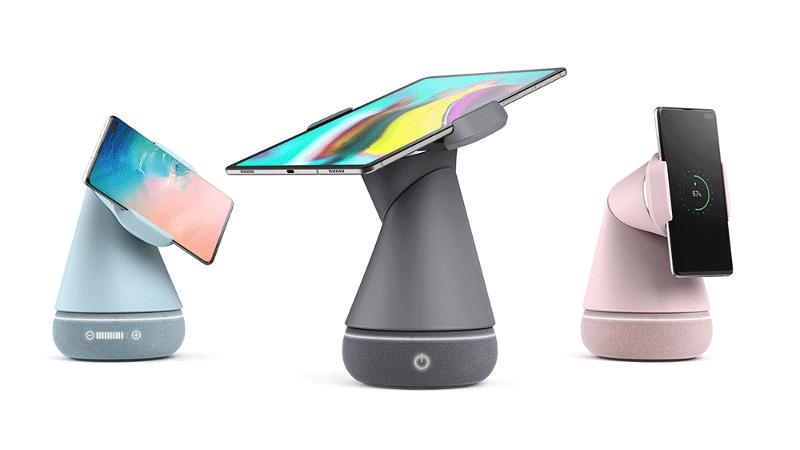 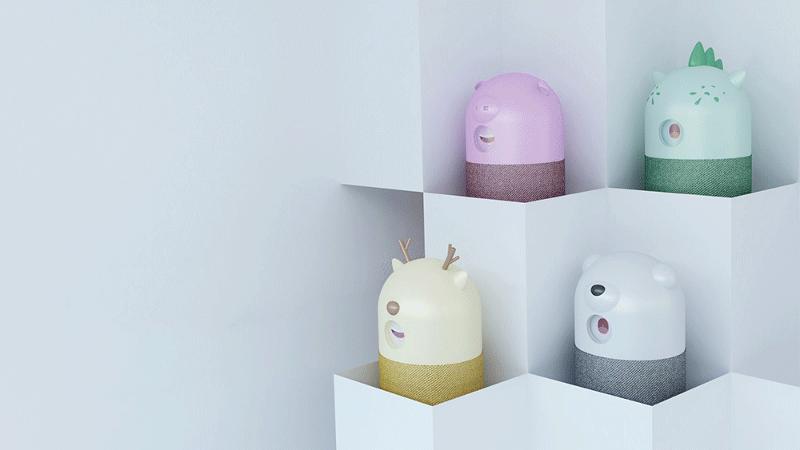 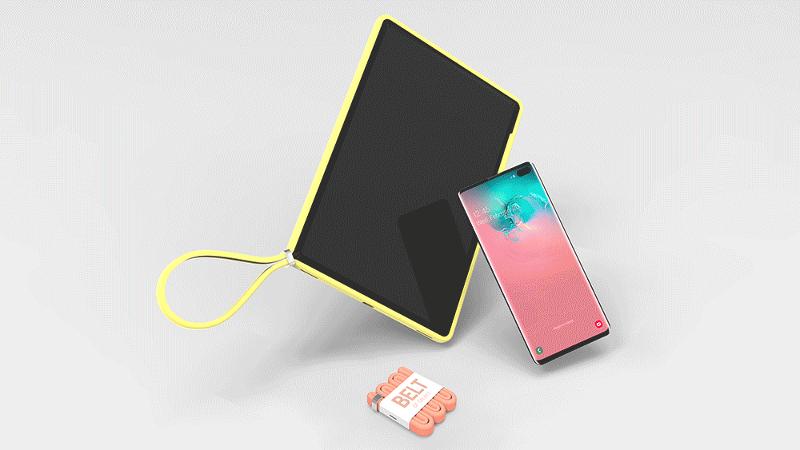