Now more than ever, we need relevant, meaningful innovations that help people connect, create, and communicate more easily so they can work, play, and stay in touch with family and friends from anywhere.

A next normal has arrived and people are already adapting and finding new ways to be productive and enjoy entertainment. In-home data usage has grown by nearly 50 percent in the U.S. since the start of the year.1 More than 25 percent of professionals said they have started using video conferencing, or are using it more often, in that same period.2

The Galaxy Note20 series is making adapting to the next normal even easier by building on the heritage of the Note series and delivering an unparalleled experience designed for users that want to get more done and enjoy premium entertainment in the palm of their hands from anywhere they desire.

Here’s a look at the Galaxy Note20 series’ most impressive features for both work and play.

From scribbling notes during a meeting to remote controlling your presentations, the S Pen has evolved to become the ultimate productivity companion. The Galaxy Note20 series takes everything you already loved about the S Pen and supercharges it.3

Powered by deep-learning technology, the Galaxy Note20 series’ S Pen has significantly improved latency for more natural, fluid writing. The Galaxy Note20 Ultra’s 120Hz display enhances the experience even more for life-like precision whether you’re jotting down notes in a meeting or scribbling down a grocery list. The S Pen’s built-in remote controls have also received a major update.

Gesture control is easier than ever on the Galaxy Note20 series with Anywhere actions – five new customizable gestures that expand on the capabilities offered by Air Actions. The new remote controls allow users to customize new actions for Back, Home, Recent App, Smart Select, and Screen Write, and make navigating and presenting easier no matter which app you’re using.

We’ve all had that frustrating moment in the middle of a meeting where we realize the note or document we need is stored on another device. Thanks to improvements to Samsung Notes, you’ll never have to worry about that again.

Backed by auto-saving and syncing across mobile, tablet and Windows 10 PCs, you can access your Samsung Notes no matter what device you’re using. So, even if you saved notes on the Galaxy Note20 or Galaxy Note20 Ultra, you can pull them up on your laptop at the meeting without hesitation. Enhancements to Samsung Notes have also made taking, editing, and managing your notes a smoother experience.

While using the S Pen to take notes, for example, Auto Straighten adjusts uneven or sideways writing so your notes are easier to read. While in business meetings and lectures, the Audio Bookmark feature now allows users to sync handwritten notes with audio recordings, allowing you to record while jotting down questions and comments simultaneously. While reviewing the audio, your notes will appear as bookmarks to help you remember the most important parts.

Samsung’s partnership with Microsoft reaches new heights on the Galaxy Note20 series. With Microsoft’s Your Phone app and Link to Windows integration on select Samsung phones, users can sync their Galaxy smartphone to their Windows 10 PC to share messages, photos, notifications and calendar reminders in almost real-time. The Galaxy Note20 series introduces a suite of new experiences for a more continuous productivity flow.

While working from home, it’s easy to get distracted with life’s little interruptions. But no matter your workflow or workspace, Microsoft integrations on the Galaxy Note20 series make it easy to be your most productive. Enjoy a seamless workflow across your phone, tablet, and Windows 10 PC through your Samsung Account, which automatically syncs Samsung Notes to Microsoft 365 experiences, including Outlook and OneNote. Your notes appear in Outlook or OneNote as an image file, so you’ll always have notes for those impromptu conference calls. You can even get your Reminders across all platforms including Outlook, To Do, and Teams, to make sure you’re always on top of that to-do list. In addition to this, Link to Windows allows you to be more productive while using multiple devices.

Building on existing Link to Windows features that allow you to answer phone calls, respond to texts, receive notifications, and access your favorite mobile apps right on your PC, the Galaxy Note20 series delivers the ultimate multitasking experience.

The Your Phone Apps feature allows you to add your favorite mobile apps to your Windows 10 PC Taskbar and Start menu to launch multiple apps from your phone with ease. The app now also allows you to copy and paste text and drag-and-drop files between your devices, so you can focus on getting more done. But the Microsoft partnership doesn’t stop at productivity features – it’s connecting users to a whole universe of gaming.

Play Your Favorite Games On the Go

From action-packed, sci-fi RPGs to strategic fantasy titles, the Galaxy Note20 series delivers the best mobile gaming experience with Xbox Game Pass Ultimate. Players can access a curated library of more than 100 of their favorite Xbox games from the cloud (beta), including Minecraft Dungeons, Gears 5, and more.

Powered by Galaxy Note20 series’ hyper-fast 5G4 and Wi-Fi 65 with optimized latency, you’ll be able to game with high-quality graphics on the go. Pair your device with a Bluetooth game controller for an even better cloud gaming experience.

Whether you’re capturing a baby’s first steps, a silly moment with your puppy, or a hike with family, the Galaxy Note20 series lets you relive your fondest memories in high-fidelity with Pro Video mode. Shoot like a movie director in 8K or 4K at 24 frames per second to give your home videos that cinematic look. Alternatively, shoot in Full HD at 120 frames per second and play back the video at 120Hz to get a super smooth look.

The Galaxy Note20 series also comes with a range of tools to make capturing video even easier. Control over zoom speed, for example, allows you to add a dramatic touch to your footage by zooming in slowly for close-ups or quickly zooming out for a grand reveal of your scene. Paired with Galaxy Buds Live, you’ll get crystal clear audio while minimizing noise in the background, making the Galaxy Note20 series the ultimate vlogging device.

Take Play to the Next Level with Multitasking

Take notes while watching a tutorial or get feedback from friends in real-time while sharing your latest video masterpiece on the Smart TV screen. You can also watch movies together with family and friends while using the Galaxy Note20 series as a remote and control the mirroring and casting functions right from your phone.

All Wrapped in a Timeless Design

A feature-packed device wouldn’t be complete without a design to match. The Galaxy Note20 series elevates the design heritage of the Note series with a timeless and durable design featuring new Mystic color options and a matching S Pen. Soft, neutral tones and a textured haze finish add a touch of sophistication and a premium feel to Samsung’s most powerful Note yet.

To learn more about the Galaxy Note20 series and stay up to date on news about Samsung’s latest devices, visit www.samsungmobilepress.com.

1 Source: Comscore report
2 Source: McKinsey & Company, COVID-19 US Consumer Pulse Survey
3 Compared to Galaxy Note10
4 Requires optimal 5G network connection, available in select markets. Check with your carrier for availability and details. Download and streaming speeds may vary based on content provider, server connection and other factors.
5 Only available where Wi-Fi 6 is supported. Availability of Wi-Fi 6 support may vary depending on market.
6 Samsung DeX wireless connection is available on smart TVs that support Phone Screen mirroring only. (For the optimal experience, use on Samsung Smart TVs launched 2019 or later.) 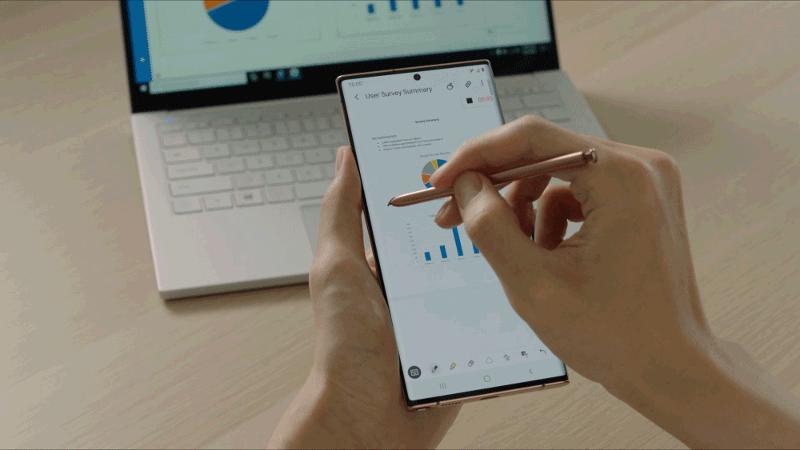 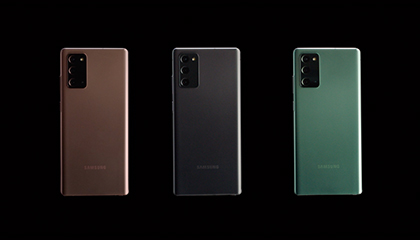 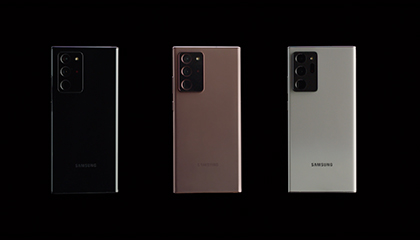 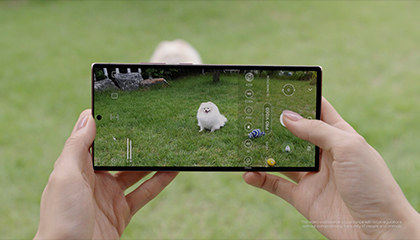 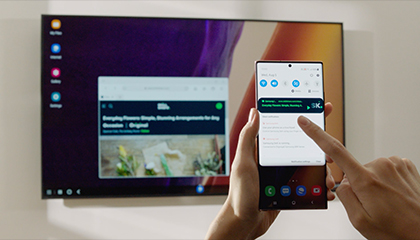 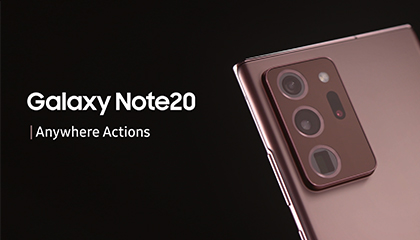 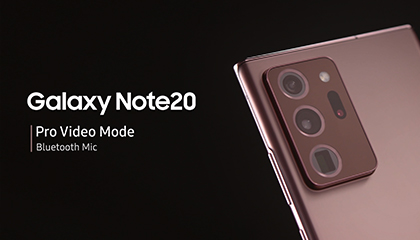