With this latest app update, Samsung is making it easier for users to get involved with the Samsung X Global Goals mission with an updated UI, revenue matching and more streamlined methods of donation.

Last summer, Samsung Electronics announced its partnership with the United Nations Development Programme (UNDP) to support the Sustainable Development Goals, also known as the Global Goals. Developed in 2015, the 17 Global Goals were set by the United Nations General Assembly and agreed upon by world leaders to help tackle some of the globe’s most pressing challenges.

In order to provide simple ways for Galaxy users to come together to support the Global Goals, Samsung and the UNDP launched an education and donation-based app, Samsung Global Goals. The app provides Galaxy users with the ability to learn more about the Global Goals and take part in small actions to help address the issues that matter most to them.

To provide the best user experience possible, along with more ways to get involved, Samsung is bringing a range of updates to the Samsung Global Goals app this January.

More Ways to Join In and Give Back

The Samsung Global Goals app offers a range of ways for users to support and give back to the Global Goals. By engaging with advertisements in the app, users are able to donate 100 percent of an ad’s revenue to the Global Goals. Samsung also recently announced that it will match all proceeds generated through the in-app advertisements to help maximize donations and make an impact, meaning that effectively 200 percent of ad revenue from the app will be donated to the UNDP by Samsung1. 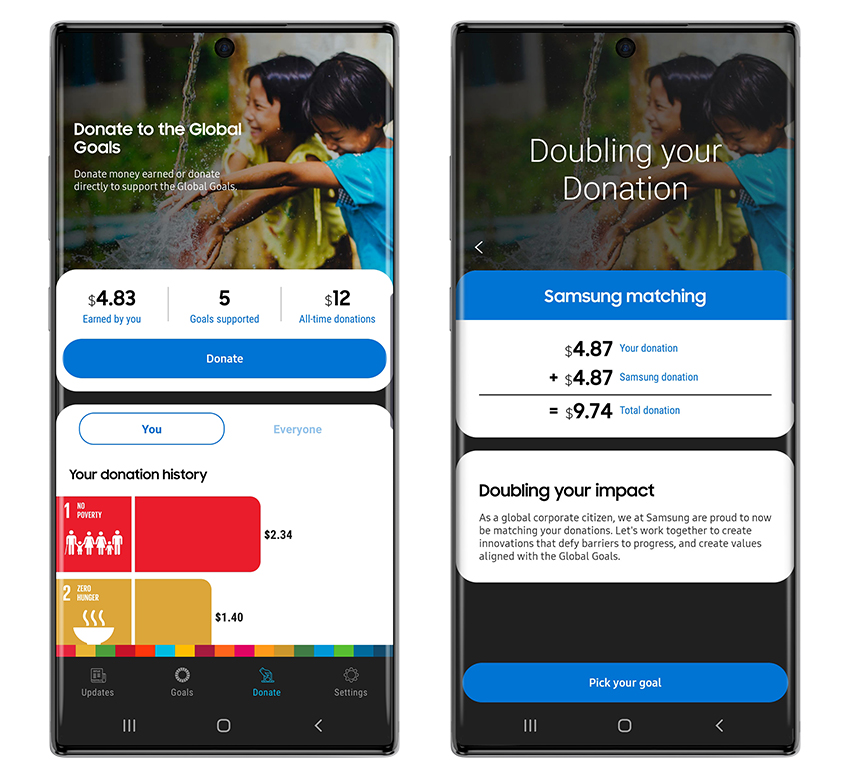 The app also allows users to donate directly in support of the Global Goals to the UNDP. With the latest app updates, users will be able to use both Samsung Pay and Google Pay2 native payment mechanisms when donating. This will allow users to directly donate to the UNDP and the Goal of their choice by simply clicking and then confirming using biometric authentication – making it easier than ever to make a difference and donation to the #Global Goals campaign. 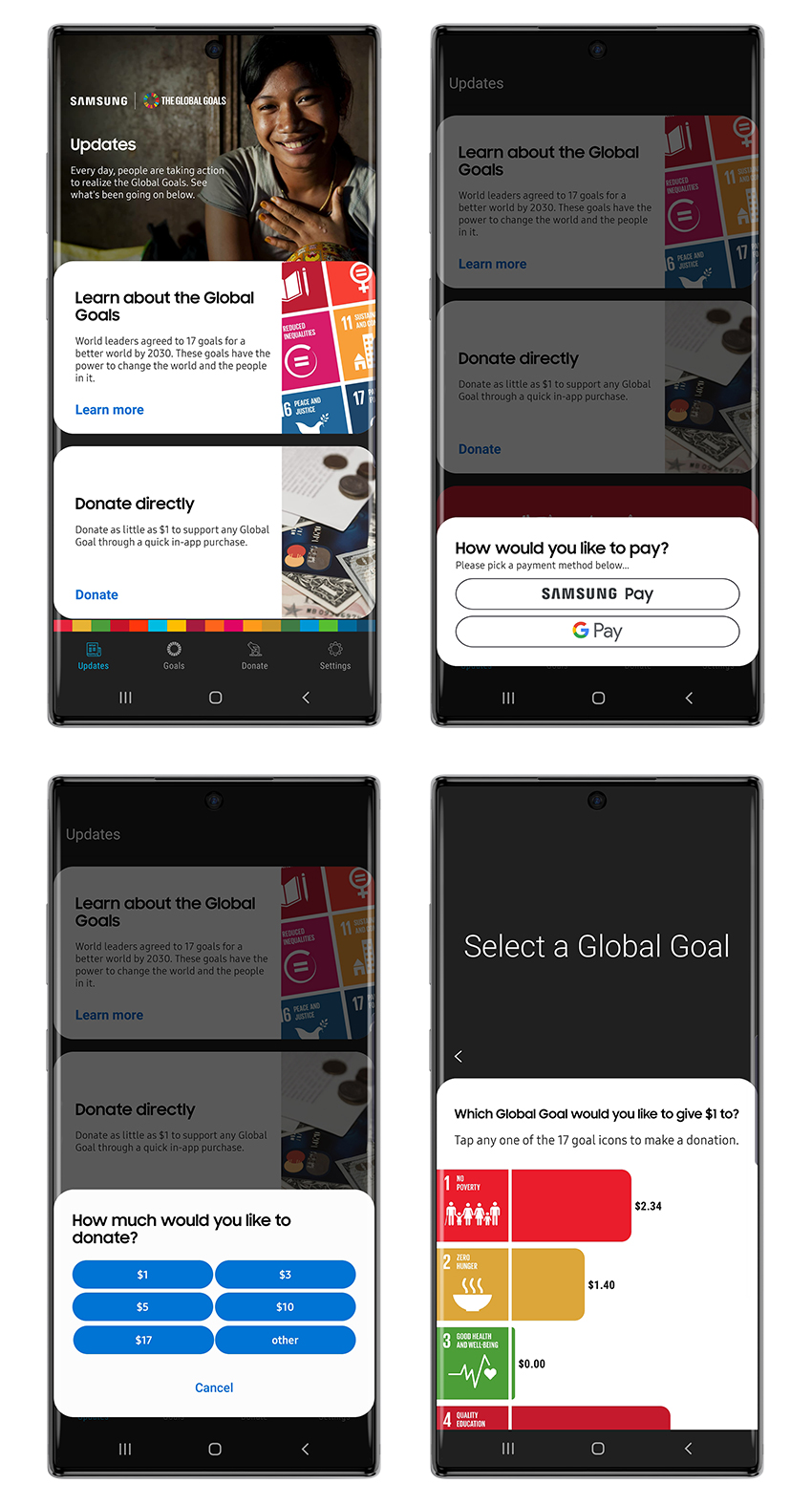 Samsung is also making it easier for users to opt into features that help generate more ad earnings, even when their phone is charging. Users can currently opt into the ‘Charge Screen ads’ feature in the Donate tab of the app, which will show ads on the device’s lock screen when it is plugged in to charge. As part of the update, the app will now prompt new users with a pop-up message providing information on this feature once their device has been plugged in to charge. This feature can be easily toggled off and on anytime in the Donate tab.

Additionally, users will be able to enjoy a wider range of lock screen options in the app’s Global Goals Lockscreen Wallpapers section, which can easily be managed in the app’s Settings page. The new wallpapers now support a wider selection of inspirational quotes, dynamic visuals, and graphic styles, making easier to stay engaged and inspired to contribute. 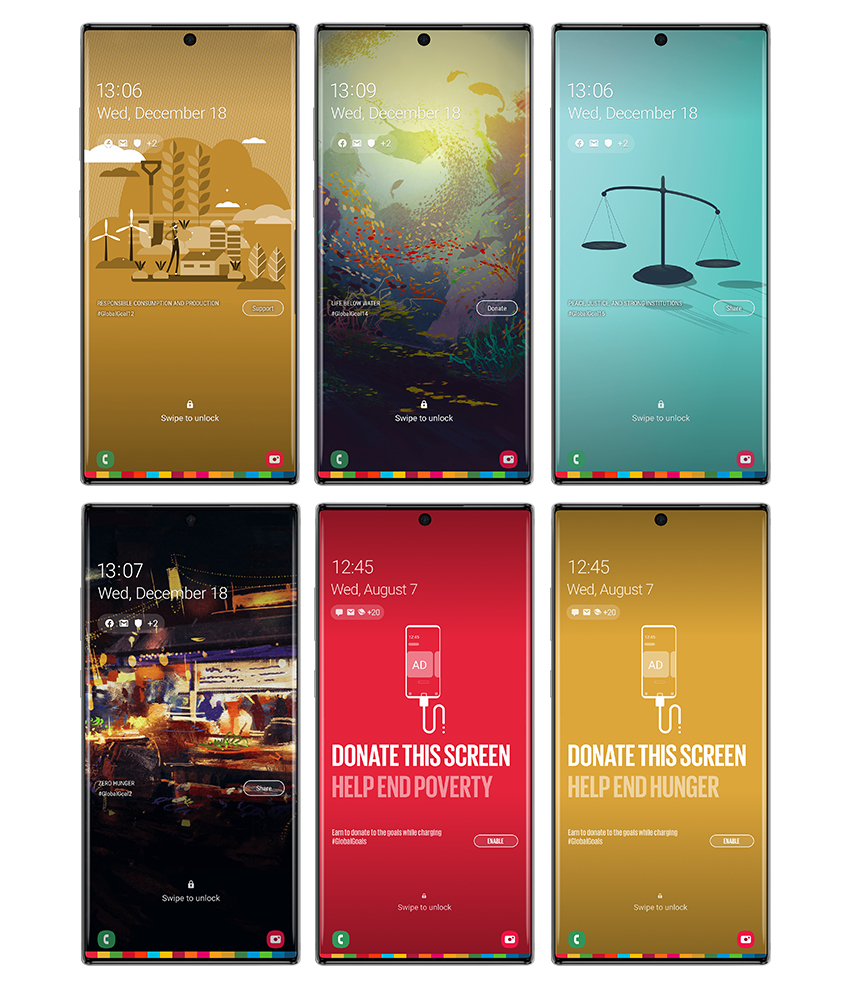 The update also brings several other UX upgrades to the Samsung Global Goals app. App notification messages have been streamlined for improved usability, each Goals’ Facts and Figures information is now more clearly linked to each Goal and users can more easily see which version of the app they are running. Galaxy users in Korea will also now be able to learn about the K-SDGs, or Korean Sustainable Development Goals, in the Samsung Global Goals app thanks to a collaboration with Korea’s Ministry of Environment.

1Samsung has pledged to match donations with ad proceeds generated through the Global Goals app; up to US$5 million annually.
2Donations through Samsung Pay or Google Pay will be available in 10 markets following the current update, including the U.S., Singapore, Australia, the U.K., Canada, France, Italy, Spain, Sweden and Brazil. This feature will be available in more regions in the future. (as of March 2020) 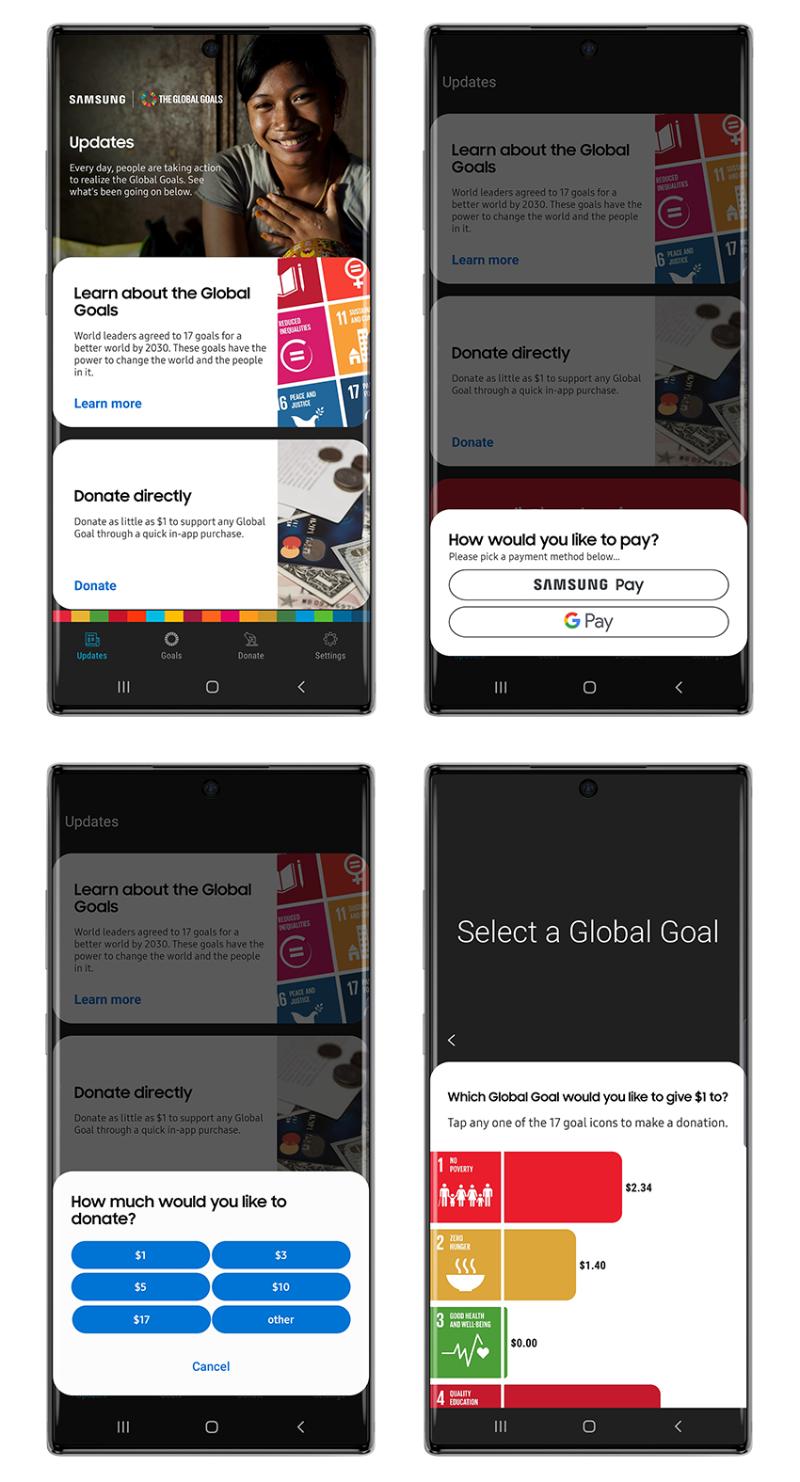 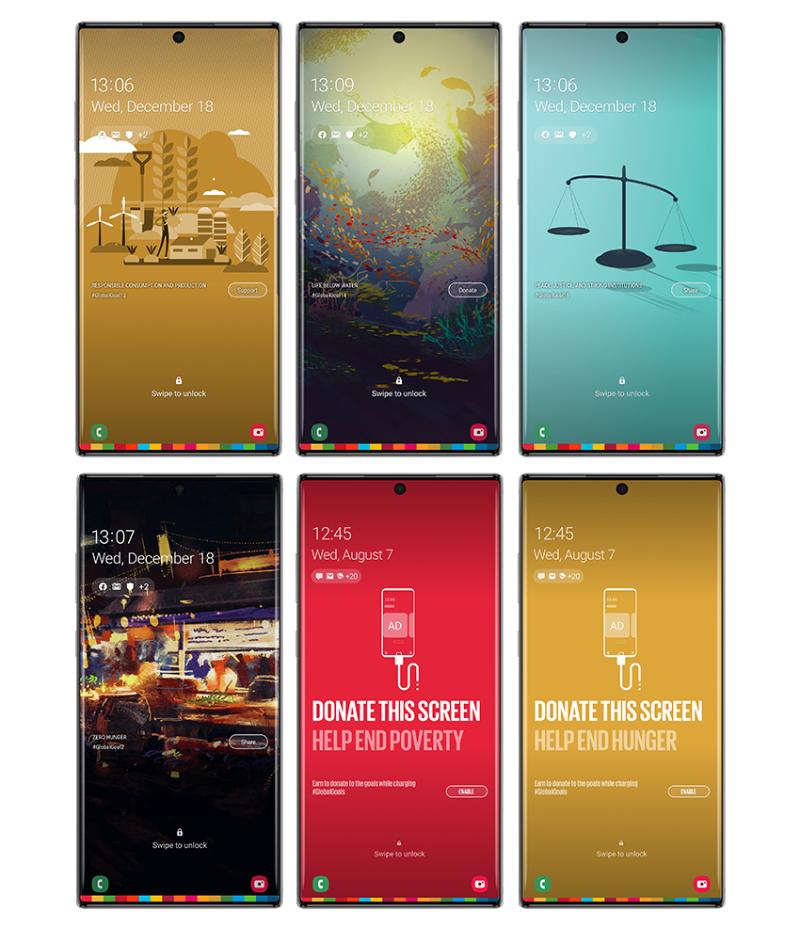