Send messages with your favorite Zootopia characters on AR Emojis

Messaging is much more fun with Samsung’s AR Emojis—augmented-reality avatars that mimic users’ expressions, transforming you via the camera app and offering a unique and creative way to inject personality into your messages.

Since the feature’s introduction with the Galaxy S9, Samsung Electronics and Disney have teamed up to bring a number of Disney characters to life as downloadable AR Emojis. Now, the addition of three beloved characters from Disney’s hit movie Zootopia has made messaging on Galaxy devices even more magical.

Judy Hopps, Nick Wilde and Flash join the ever-growing roster of animated Disney characters that are currently available for users to download, including Mickey Mouse and friends as well as characters from The Incredibles and Frozen.

To download the new characters, simply access the camera’s AR Emoji mode, tap the plus icon on the right-hand side, and select the Zootopia AR Emoji pack from the Galaxy Apps store.

Once downloaded, you’ll be able to easily create and share the animated emojis as images, videos or gifs in your favorite messaging app*. And if you simply can’t get enough of their cuteness, you can also apply an AR Emoji of Judy, Nick, Flash, or any of the other characters listed above as a GIF and pin it on your device’s Always On Display, or apply it as a video on your lock screen’s wallpaper**.

Head over to the Galaxy Apps store to download Samsung and Disney’s latest AR Emoji characters.

*Apps that do not support animated GIFs may still send AR Emoji stickers as a still image.
**Function supports videos up to 15 seconds in length. 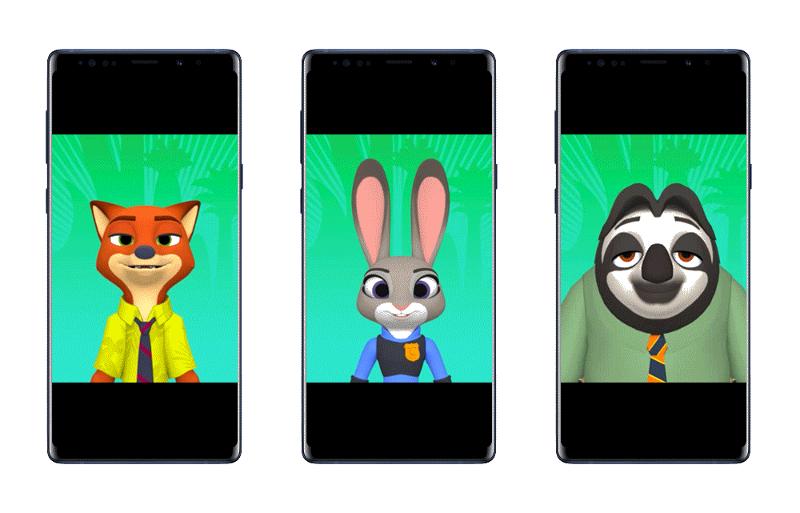