World-renowned lifestyle magazine Vogue handed over the Galaxy Z Flip 5G to a selection of famous faces as they embarked on the endeavor of creating a heartwarming festive video. Take a look at how the Galaxy Z Flip 5G’s revolutionary design and powerful camera helped them unleash their creativity.

A foldable design, revolutionary Flex mode and lightning-fast 5G connection, the Samsung Galaxy Z Flip 5G is a phone designed for our times.

From simply staying in touch with friends and family, to finding inventive ways to have fun and celebrate the ones we love, 2020 has seen us take our relationship with technology to dizzying new heights – and nowhere more so than in Samsung’s The Greatest Gift, featuring the Galaxy Z Flip 5G.

This year may have presented more challenges than most, but one of its greatest gifts has been the way it has inspired us to use our creativity (and our smartphones) to stay connected with one another like never before. Collectively showing our love for people via video message has become an important part of how we communicate, with each of these new digital endeavours pushing the limits of our imaginations a little further and the bar ever higher. Enter British rapper AJ Tracey and actor Jess Alexander with The Greatest Gift, an A-list lesson in creative collaboration brought to you by Samsung’s latest innovation.

The film, released this November, sees AJ Tracey, Jess Alexander and a cast of Vogue talent – Harris Reed, Rina Sawayama and Checking Invoices – use Samsung’s physics-defying phone to produce a video gift for a famous friend. As the Z Flip 5G helps them to effortlessly connect and create, each of their entertaining artistic efforts offers insight into who the recipient of the film might be as well as just what this foldable phone can do. 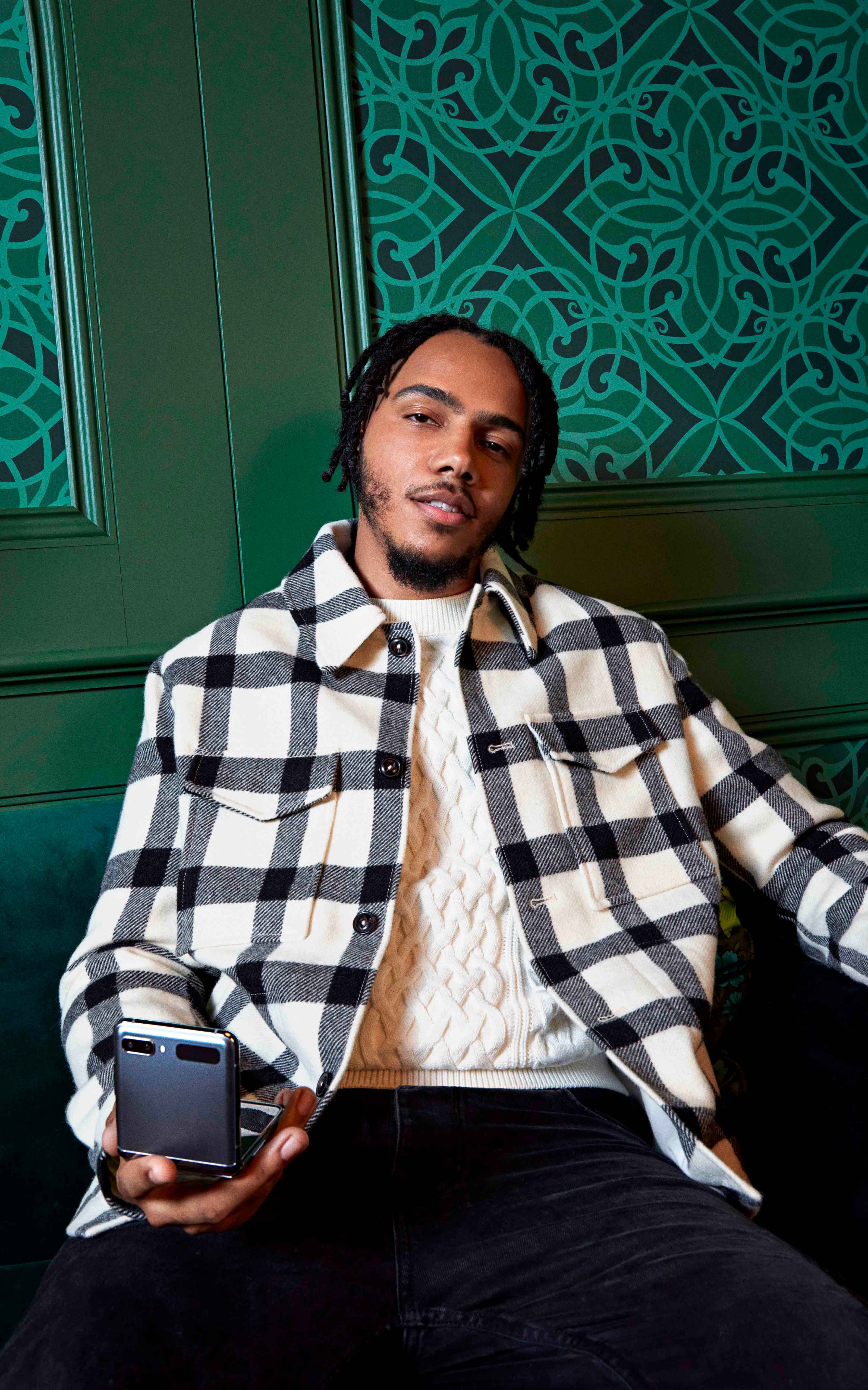 AJ Tracey, rapper
“I’m feeling the fact that it’s a flip phone, I’ve been missing that feeling of whipping my phone out and flipping it up to shout someone since school times – it’s very nostalgic and very stylish,” AJ Tracey tells Vogue. For Tracey, who has been staying connected with more than a million Instagram followers and a staggering 7 million average Spotify listeners per month via live-streams, the Z Flip’s hands-free videoing capabilities (enabled by its flexible Hideaway Hinge) are also a key part of its appeal. “I feel like live-streams are a very direct and personal way to talk to my supporters and show them that I’m doing OK and haven’t forgotten about them,” says the 26-year-old London-born rapper. 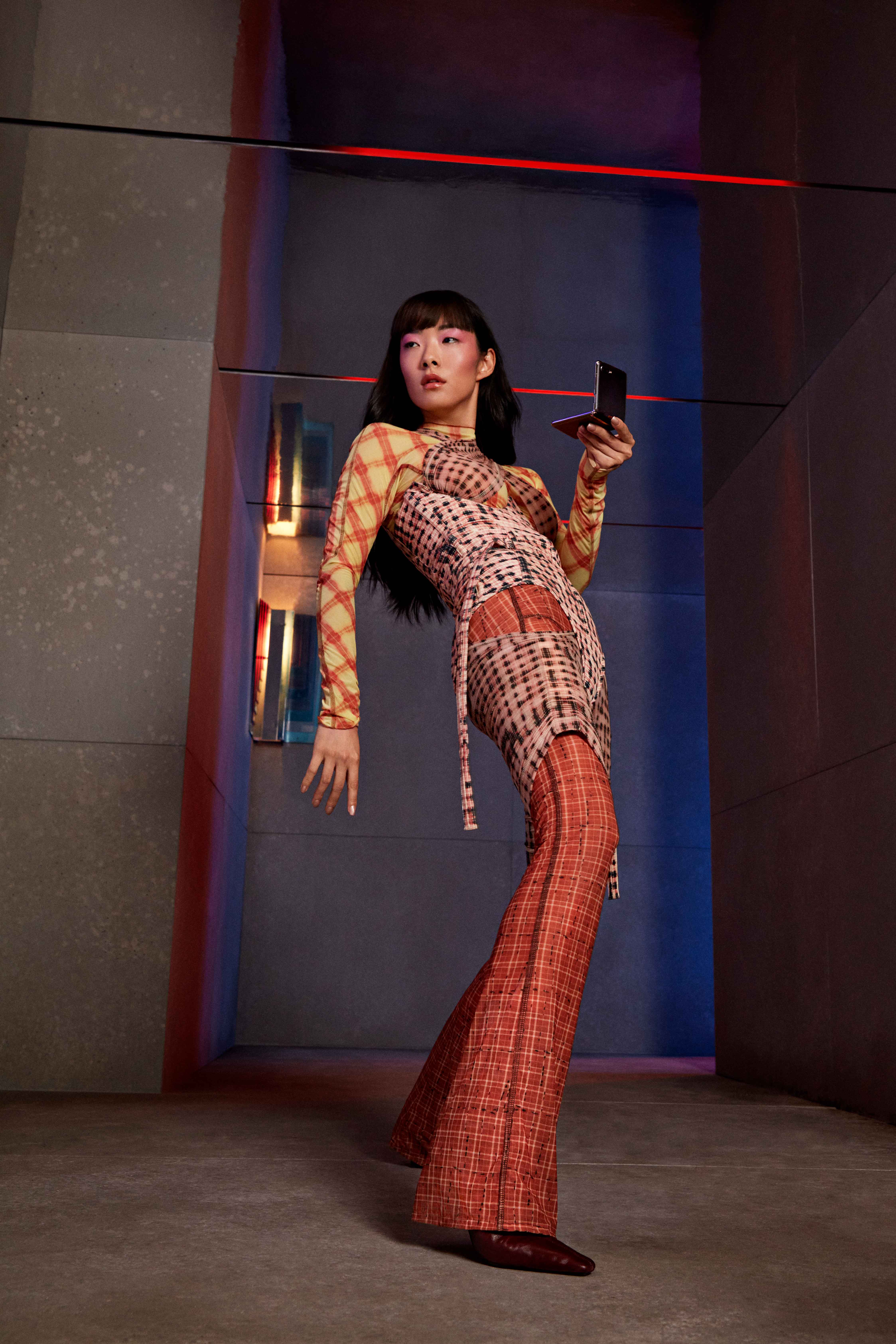 Rina Sawayama, singerIt’s a tactic shared by Japanese-British singer Rina Sawayama, who used video live-streams to talk to her fans in real time, and host Q&As following the release of her eclectic debut album, Sawayama, during lockdown. For Rina, the Z Flip’s satisfyingly square, micro-design is an irresistible nod to the iconic ’00s flip phone: “I grew up wanting a flip phone and now there’s one with a full-glass screen. I’m actually obsessed with it. The folding glass really blows my mind – it's an incredible engineering feat,” says Rina.

For Tracey’s co-star British actor Jess Alexander, who passionately delivers some lines from Romeo & Juliet for her part of their virtual show of appreciation, the Z Flip’s design is pleasing in both style and practical terms. “I love the design, it means the screen’s protected and I can actually fit my phone into my handbags and my pockets,” she explains – see the 21-year-old’s Instagram for a healthy dose of ’00s style inspiration alongside some ingenious examples of how to draw your audience’s attention to some of 2020’s most important causes. 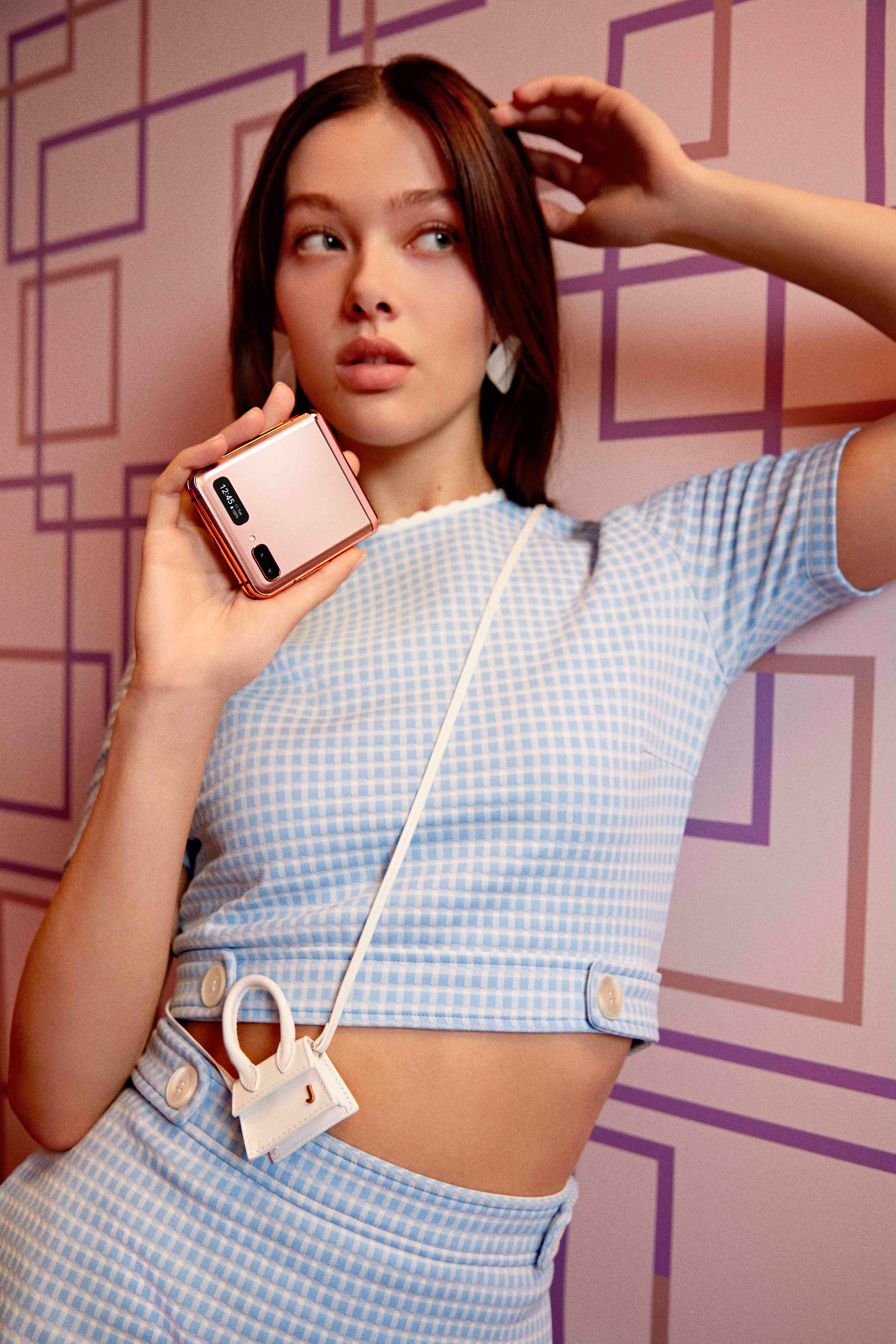 Jess Alexander, actorHaving cut her teeth early as a presenter on cult Gen Z YouTube show Kyra TV, Alexander’s breakout acting role came in hit prep-school murder mystery Get Even (an irresistibly pulpy BBC series picked up by Netflix), with her latest film role arriving this year in A Banquet. Twenty-twenty has presented Alexander with a much-welcomed opportunity to slow down and reconnect with herself and her creativity. “I think people have had the time to look internally at themselves and think about what's important. Things like creative freedom, real connections and friendships, and treating people with kindness.” 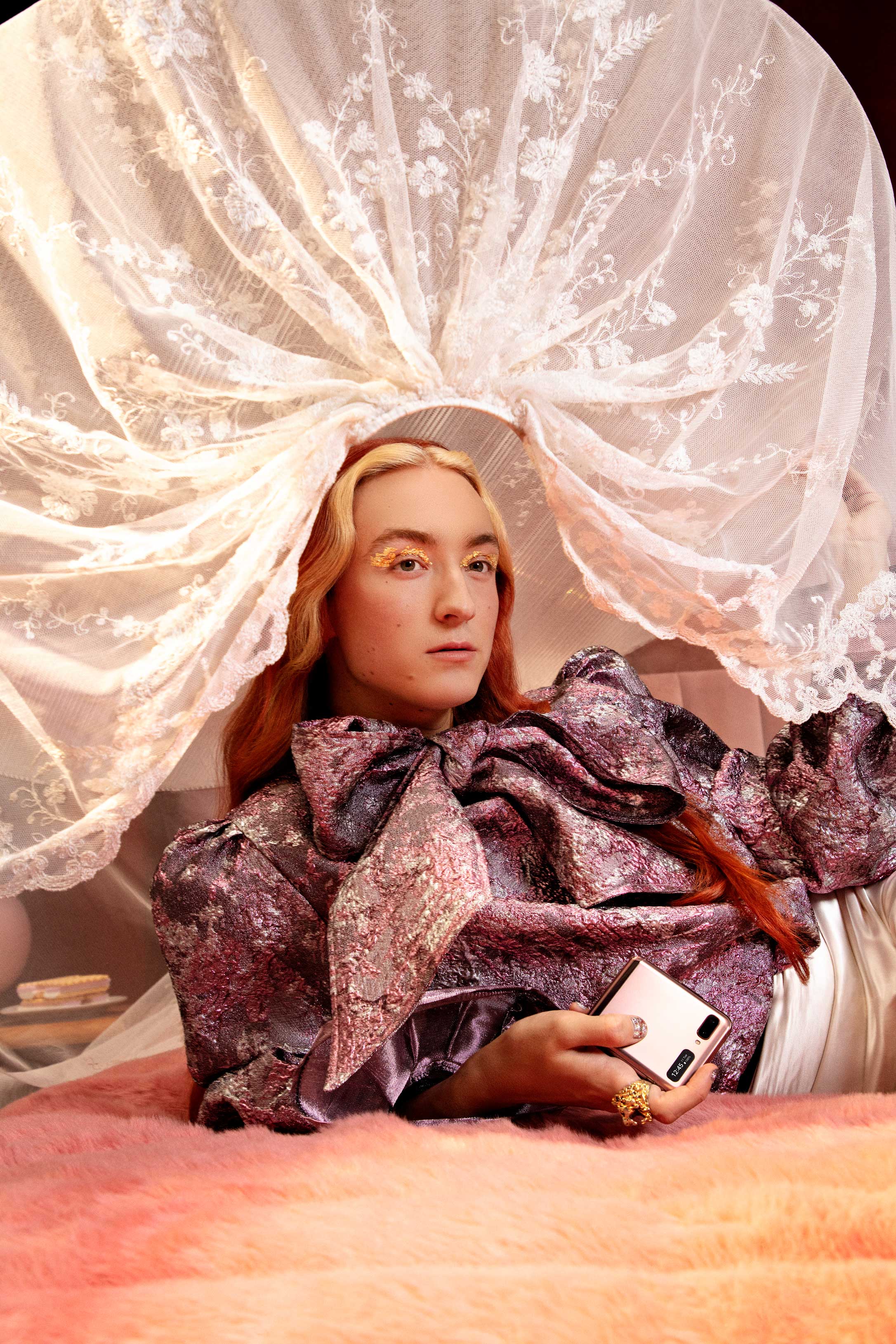 Harris Reed, fashion designerFashion designer Harris Reed has also used this year to reflect on their creativity. “We’ve all had to reevaluate what creativity and connection look like, and for me it all came down to my phone and being able to have fun with documenting my process in different ways,” Reed tells Vogue. At 24, the British-American has already dressed Harry Styles and Solange Knowles on multiple occasions, modelled for Gucci and created a viral Instagram filter featuring the white wide-brimmed hat they designed for a first-year project on the prestigious fashion design course at London’s Central Saint Martins. All this before creating their highly anticipated final-year collection in lockdown, which they shot entirely on their phone. “It’s incredible to have a phone that makes it so easy to talk about my work and get it out there to people,” Reed explains.

The Greatest Gift’s most surreal scene comes courtesy of Checking Invoices, a masked fashion anomaly (and Instagram phenomenon) who describe themselves as an “anonymous duo based nowhere”. Picture a glittering pink dress worn over a silver Morphsuit accessorised with sunglasses, stilettos and the Samsung Galaxy Z Flip (propped on a bronze bath) and you’re somewhere close to the brilliance of Checking Invoices. For the Greek photographer and stylist behind the fashion enigma, who are in fact currently based in Milan and Athens, the Z Flip is a natural extension of their unique creative vision. “We love it. The colour palette is amazing and so unique. It’s the perfect accessory to complete our look,” Checking Invoices say while tapping the phone with their pointed four-inch long bronze nails. 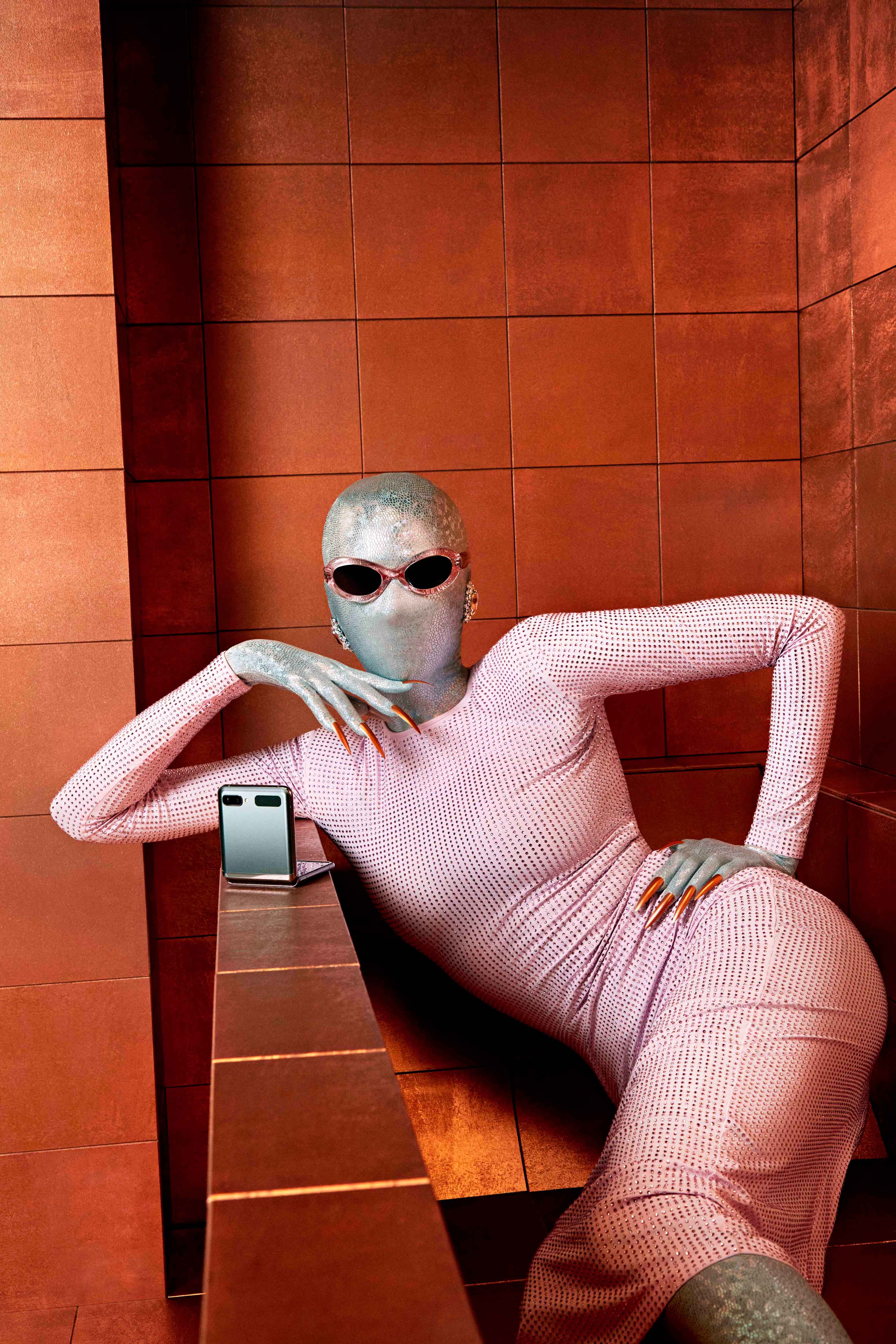 Checking Invoices, anonymous duoLike so many of us, AJ Tracey and his The Greatest Gift co-stars have found 2020 challenging in parts, but the rapper, in particular, has made sure he’s capitalised on his time at home to perfect his craft – as well as his banana bread and online gaming. “I’ve obviously had a lot more ‘free time’, which has enabled me to have more fun doing the things I’m inspired by at home. I think the added time for gaming, streaming, cooking and making beats has done me good, I’ve definitely written a lot more bars than usual,” he explains.

See what they created with the Samsung Galaxy Z Flip 5G in Part II of The Greatest Gift below.

*This article was originally published on Vogue.
*Photography: © Wendy Huynh 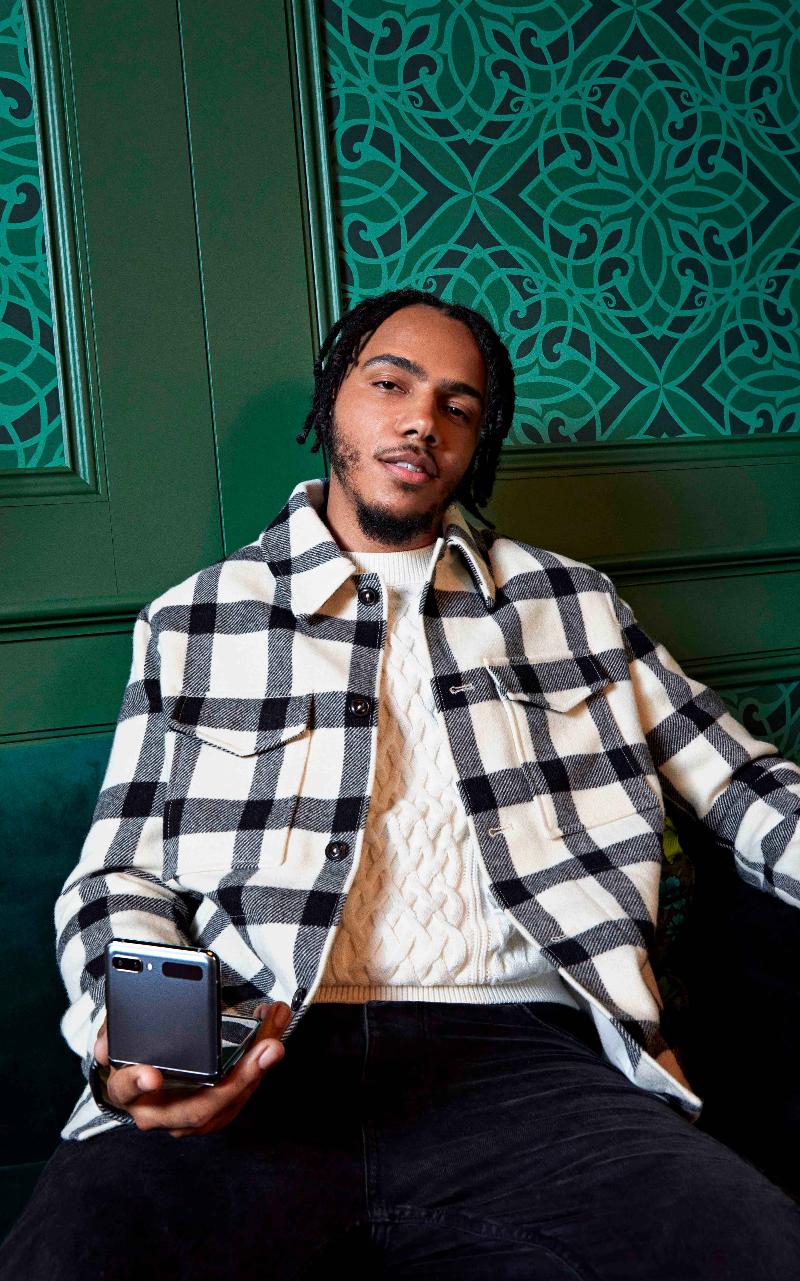 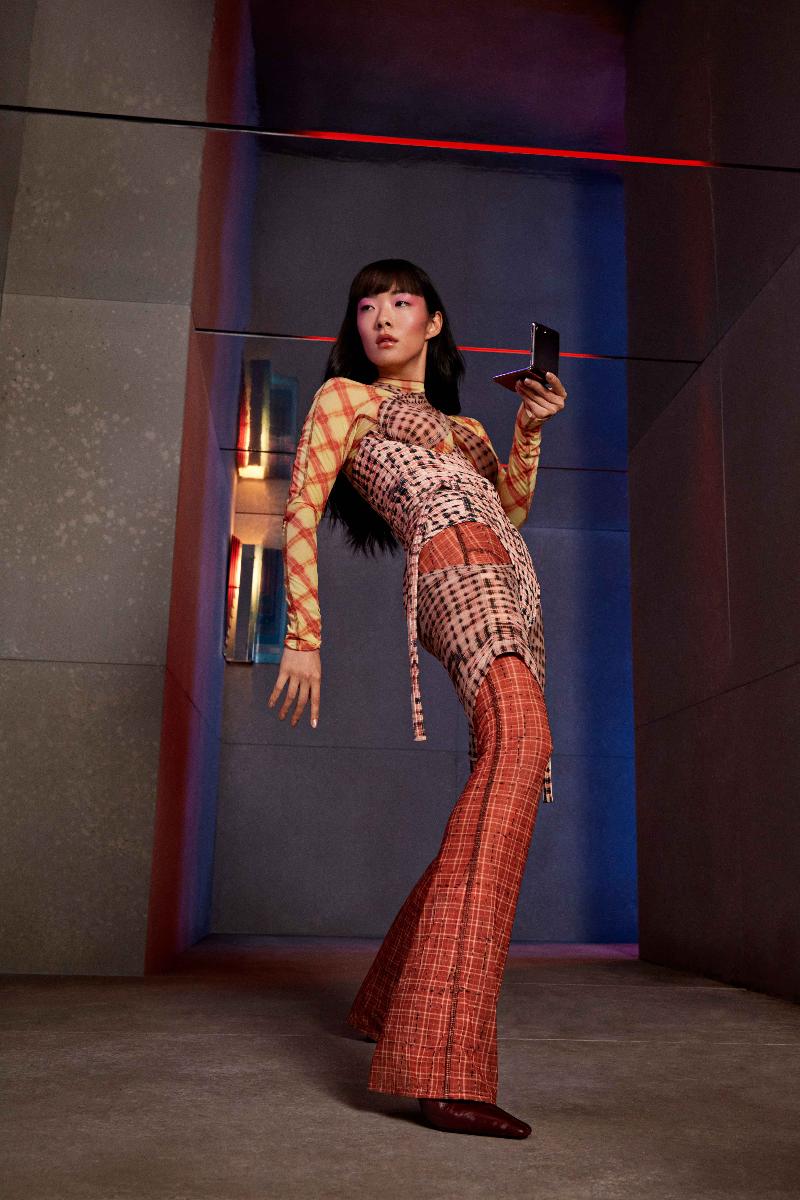 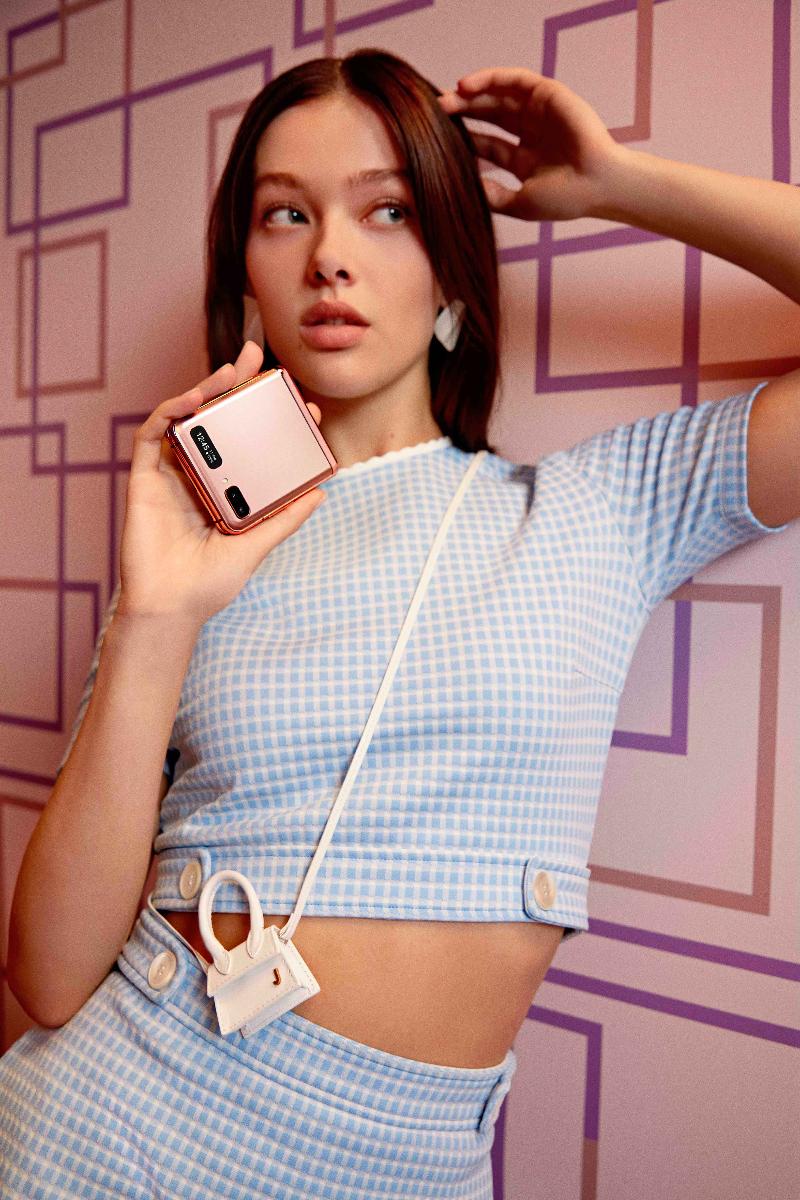 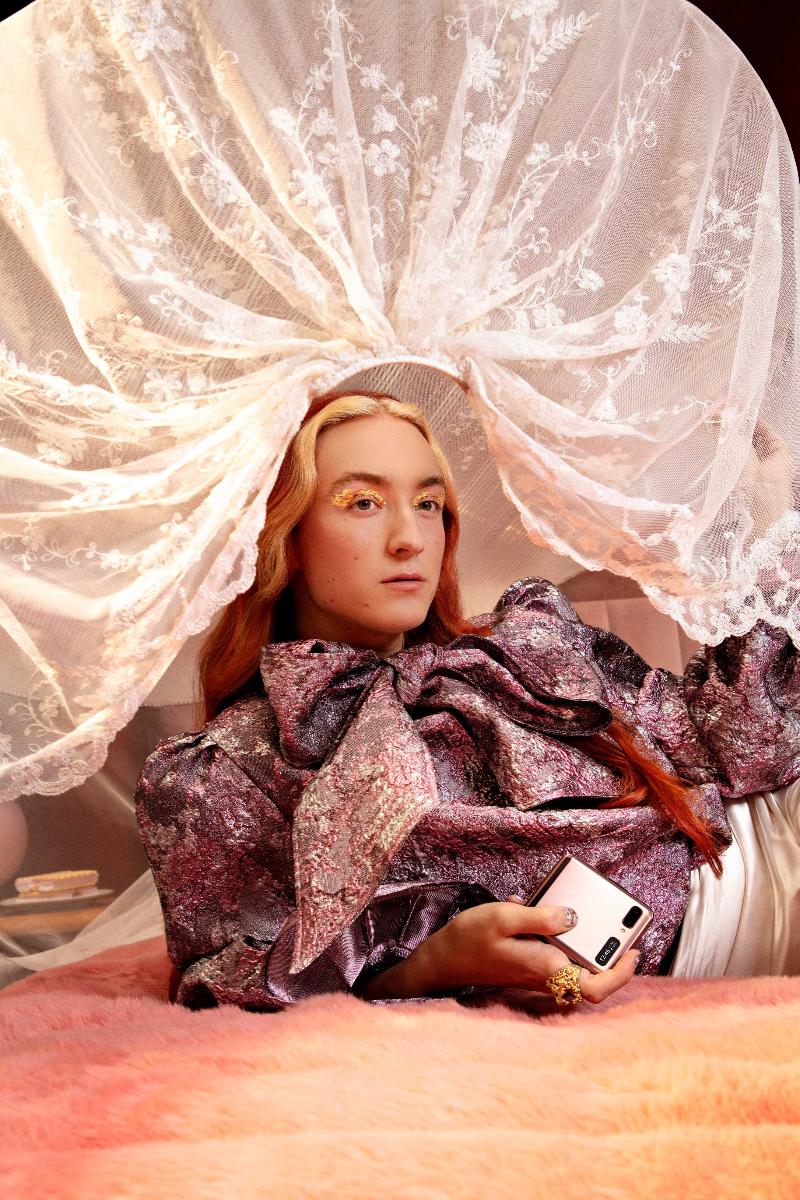 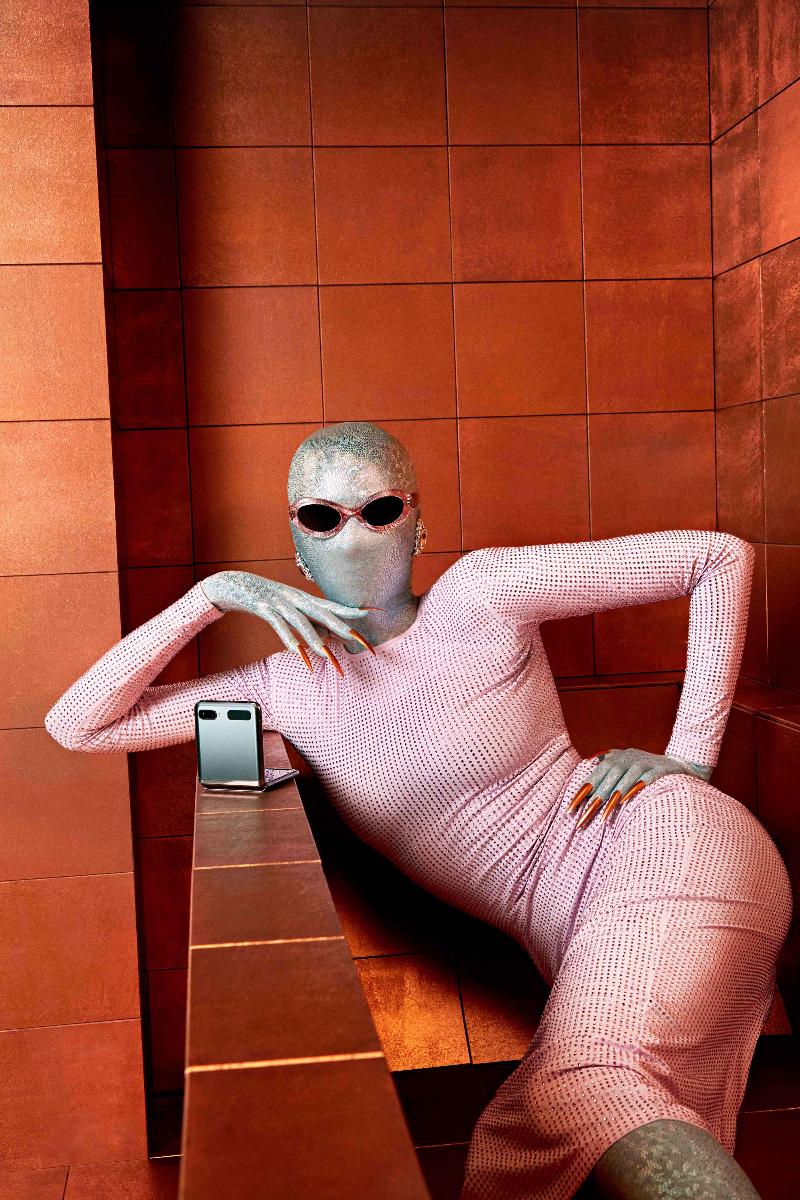 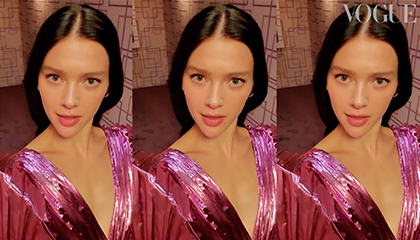