Henry Hongmin Kim, Corporate VP and Head of Global Design Strategy at Samsung Electronics talks about their collaboration with Thom Browne to bring about the design for the Galaxy Z Fold2 Thom Browne Edition.

When Henry looks at foldables, he sees exciting opportunities. He sees devices that can be both large and small; devices that can unlock a new era of mobile experiences while also paying homage to the past. In Samsung Electronics and Thom Browne, Henry sees two companies with similar design philosophies; companies who have come together to create a best-of-both worlds fusion of timeless style and futuristic technology.

Read on to learn more about the design process behind the companies’ latest eye-catching collaboration.

Q: Why did Samsung initially choose to collaborate with Thom Browne?

From the offset, the collaboration between Samsung and Thom Browne – two companies which possess distinct design identities in two very different industries – was a challenge for both parties. However, we believed from the beginning that we could draw upon the similarities between the worlds of fashion and technology to create a smartphone that introduced an entirely new design identity.

If you think about it, the identities of the Thom Browne brand and the Galaxy Z Fold2 are both strong and clear. Both stand out in a crowd – the Galaxy Z Fold2, with its one-of-a-kind form factor, and Thom Browne, with its signature designs. Together, we were able to create a brand-new identity. An identity that’s just as much a fusion of fashion and technology as it is a combination of past, present and future. The Thom Browne brand is so classic and timeless that this special edition, as futuristic as it is, would fit right in if it were released in the middle of the twentieth century. That’s what makes this partnership so strong.

Q: Looking back, did you expect that the Galaxy Z Flip Thom Browne Edition would receive such an enthusiastic response?

For Samsung, the Galaxy Z Flip represented entirely new ideas: a new form factor that folds up and down, and our first collaboration with the fashion house Thom Browne. I think this unexpected yet completely natural collaboration captured consumers’ hearts. Thom Browne went beyond the limits of traditional smartphone design to create a look that perfectly aligns with Samsung’s technological vision. Consumer response was incredible, leading to sellouts in Korea, Japan, the United States and China. 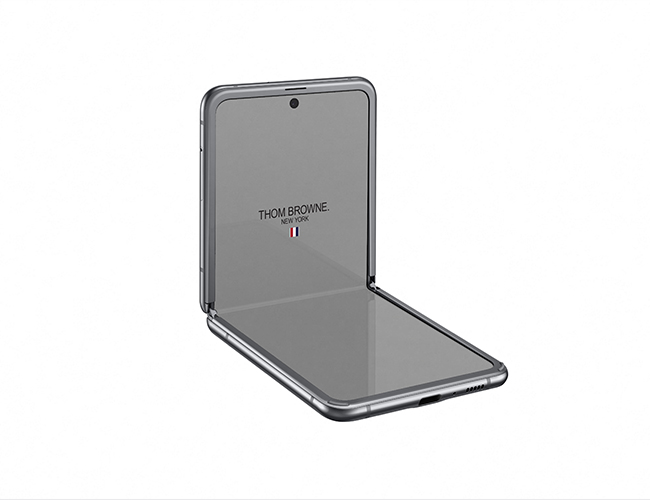 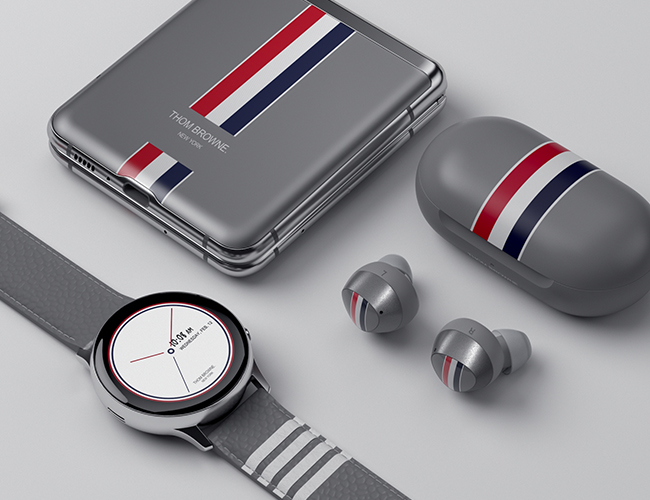 Q: What are some of the key benefits that come with foldable smartphone designs?

The Flip’s design is highly portable; it folds up and down, and you close it to end a call. The Fold’s design assures optimal usability, making it great for multitasking and enjoying immersive content. Both devices offer a new experience, but in terms of design, the Flip feels much different than anything smartphone users are used to.

The Flip is a device that invites curiosity and mystery. For this special edition, the entire exterior was designed in Thom Browne’s signature colors to express its unique design heritage. If the focus of the Flip is offering a compact and iconic design, then the focus of the Fold2 is providing a more immersive experience. An experience that not only includes a larger screen, but also a fully realized Thom Browne UX. Examples of the latter include the device’s use of the brand’s signature Four Bar pattern, which extends to areas like wallpapers – some of which change every day. This type of approach delivers new levels of value to consumers who embody the Thom Browne lifestyle. 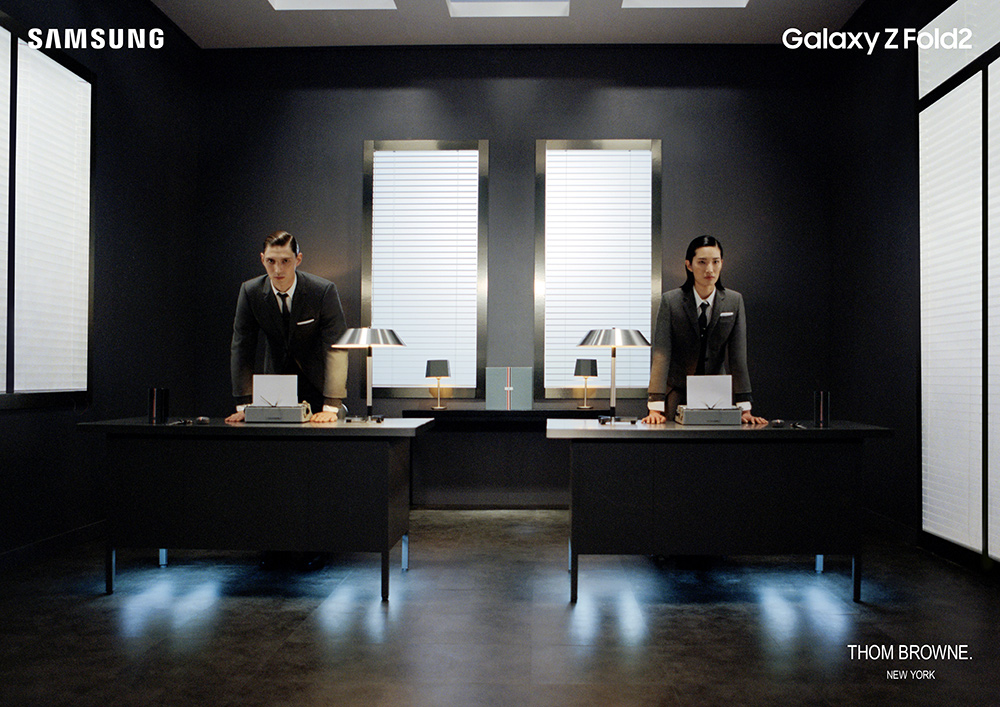 Q: Could you expand on how you collaborated with Thom Browne for this edition?

The Galaxy Z Fold2 is an engineering wonder. The smartphone’s design creates a true sense of immersion, made possible by the combination of countless components moving seamlessly together. That precision is precisely what makes this device so magical.

Thom Browne is a brand that’s obsessed with precision, and I myself insist that each and every detail of a smartphone design, no matter how small, is absolutely perfect. When it comes to new products, the worlds of tech and fashion can vary widely in terms of design approaches, materials and manufacturing processes. Therefore, when preparing for our first collaboration, we needed to work together to understand our differences and express our opinions clearly.

By respecting and learning more about our unique design philosophies and identities, we were able to successfully develop all-new innovations together. Because we wanted this edition to be premium in every way, we had many departments work together to develop new solutions, and there was a constant flow of feedback.

Q: What are some of the standout features of this new edition?

The design of the Galaxy Z Fold2 Thom Browne Edition is more premium and complete than other smartphone designs. To make the design even more striking, we enhanced the device’s back glass with the Thom Browne logo, and introduced an innovative technique that makes the brand’s signature stripe appear to have the texture of fabric. This creates a pleasing sense of unity that brings the whole design together.

In addition to enhancing the device’s exterior, we’ve also incorporated new lock screen options, along with dedicated photo filters, icons and more, that all come together to create a well-rounded UI. The device’s flip cover features Thom Browne’s signature pattern down its middle, while the practical back cover is completed with the brand’s iconic Four Bar pattern in white.

The smartphone’s accompanying Galaxy Watch3 features a matte hairline pattern that completes its modern and minimal design, while the Galaxy Buds Live feature a luxurious finish, along with a Thom Browne-designed leather case. In addition, each and every accessory, including the smartphone’s charger, cables and more, was enhanced with Thom Browne design elements to evoke a sense of unity.

Q: Did you have a particular type of user in mind when designing the Galaxy Z Fold2 Thom Browne Edition?

When designing the device, we focused above all on offering users new lifestyle experiences. This required us to think beyond Tom Brown’s fashion expertise and Samsung’s innovative designs. I approached the design process by imagining a device that would allow users to experience the value of two distinct worlds. By delivering this, we’re enabling users to enjoy an all-new mobile experience, which combines the best of the worlds of technology and fashion. 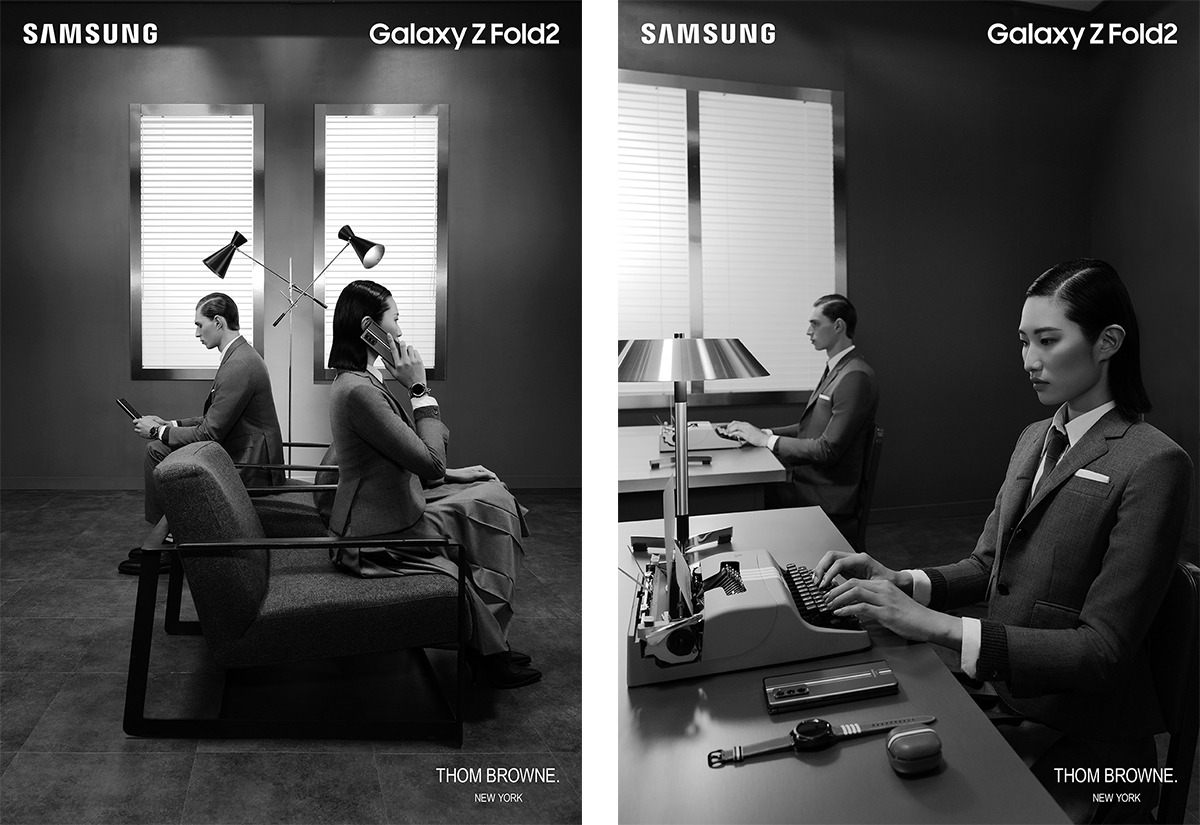 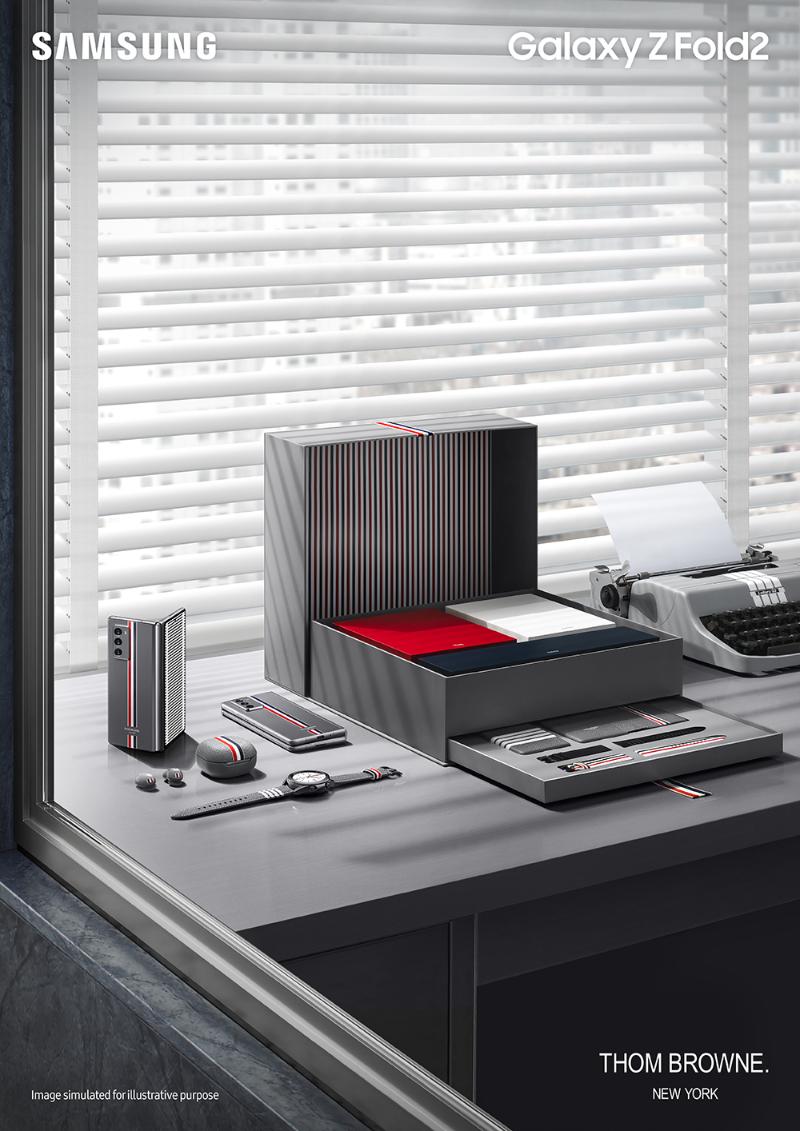 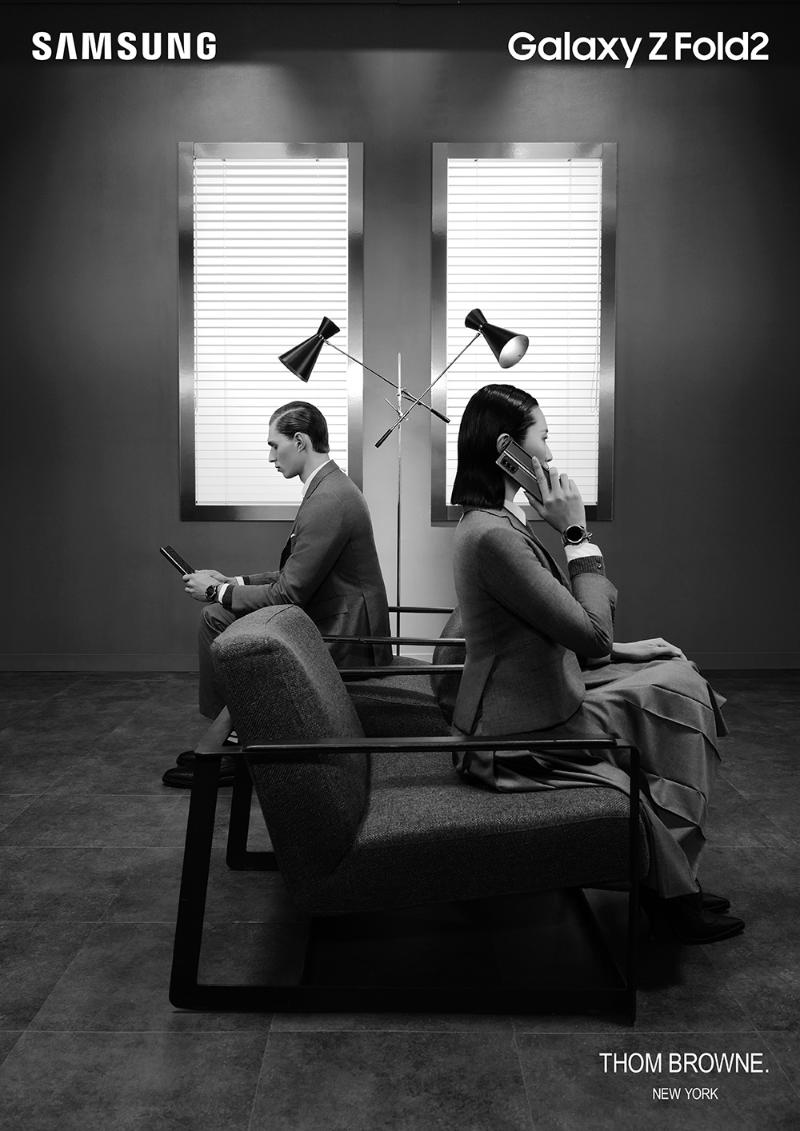 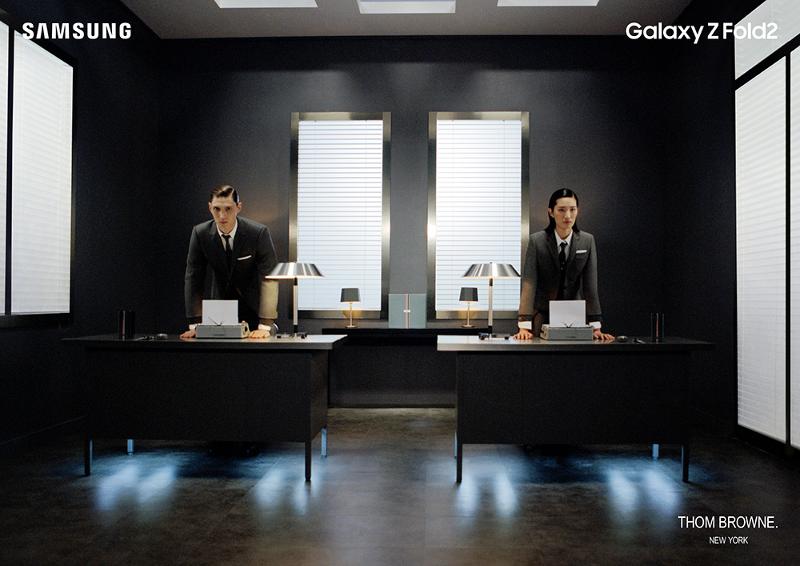 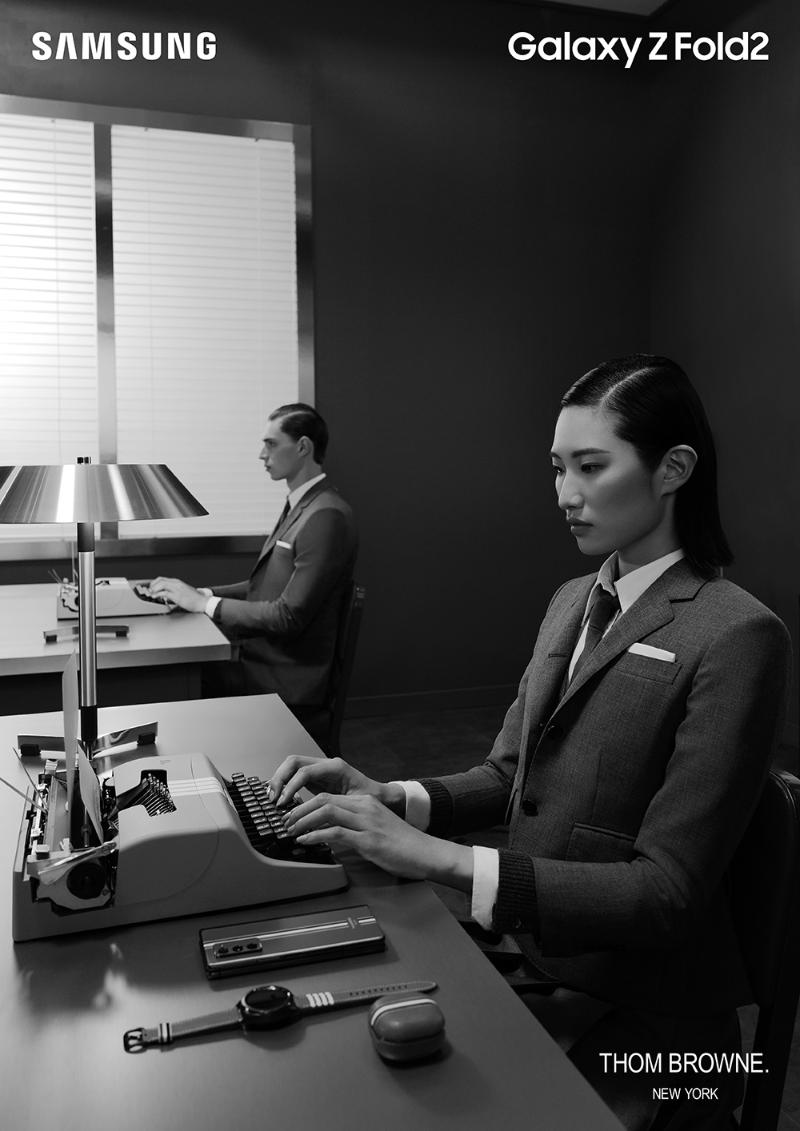 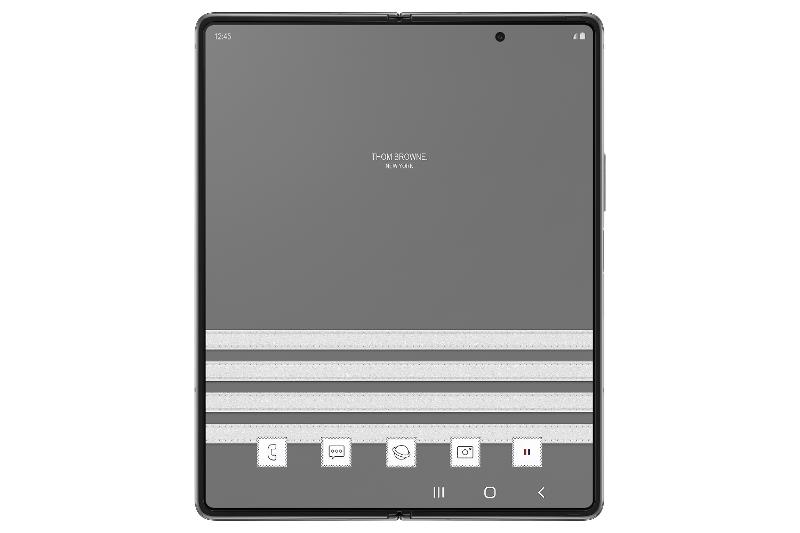 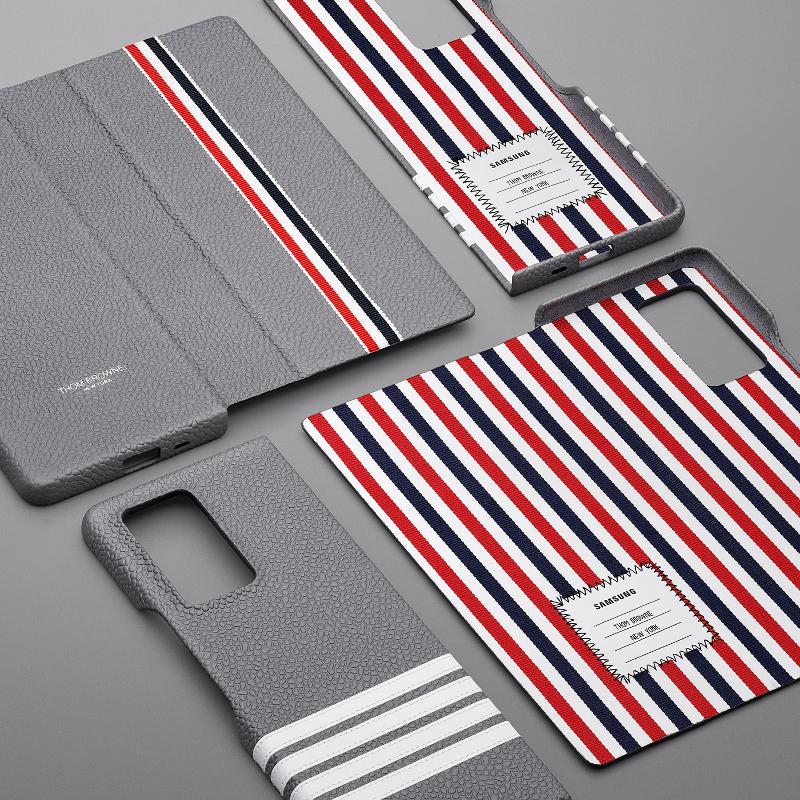 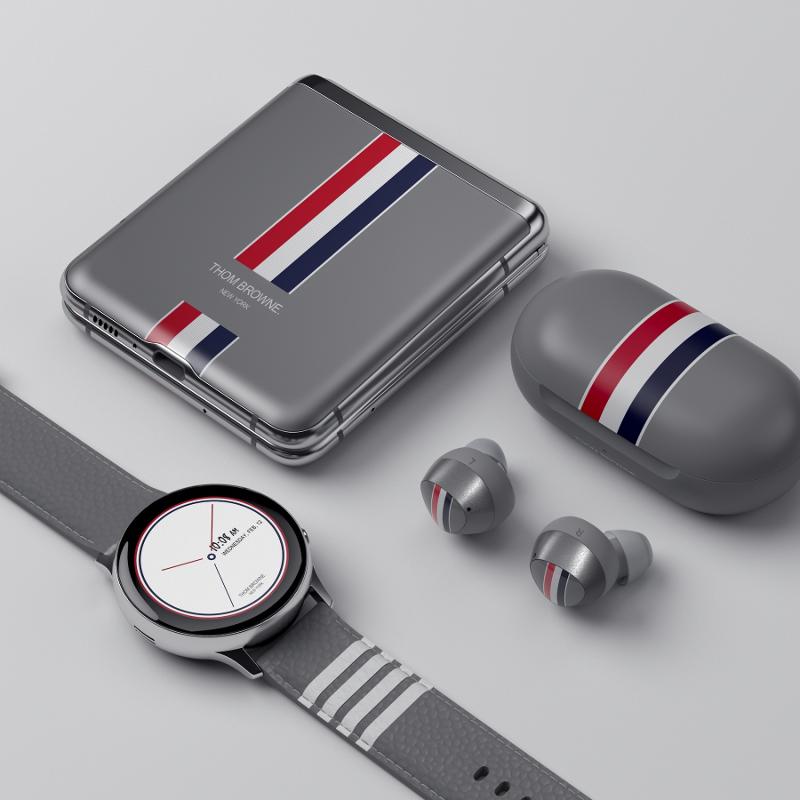 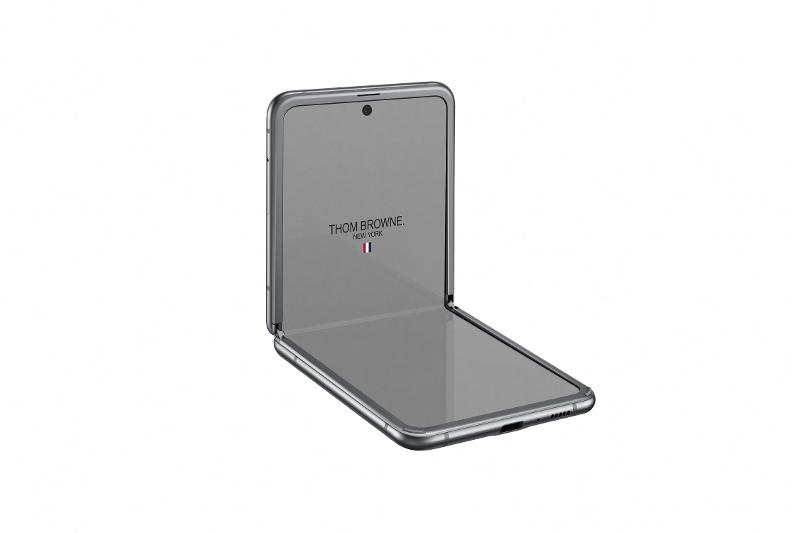 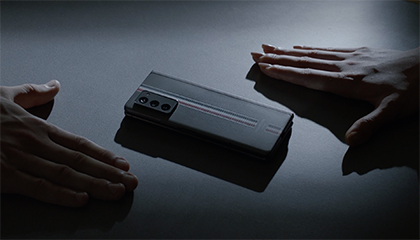