Samsung’s Galaxy Book S, Galaxy Book Flex and Galaxy Book Ion have been equipped with high-performing batteries to ensure they can meet users’ needs for longer in all manner of environments.

From offices to cafés, and airport lounges to libraries, people can be seen using laptops to work, study and watch videos from wherever they are. To enable this kind of usability, laptops must be underpinned with reliable, high performance power options, meaning that battery lifetimes and charging speeds have had to evolve to keep up with demand. 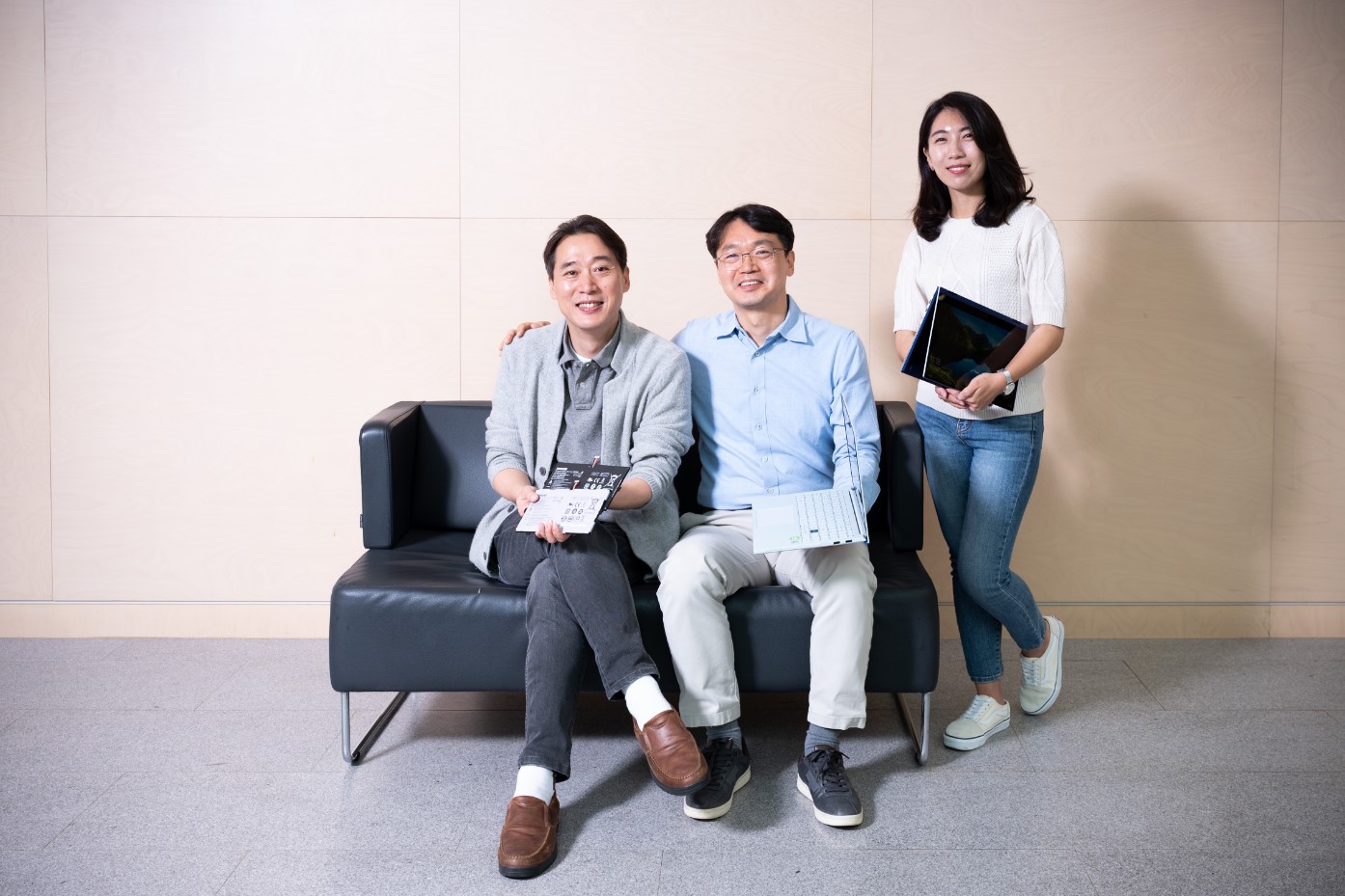 ² (From left) Engineers SungHoon Kim and Jehwan Lee, who developed the battery for the Galaxy Book series, and product planner Hyemi Sung

In an environment in which laptops must continually overcome their limitations to meet new sets of needs, the Galaxy Book S, Galaxy Book Flex and Galaxy Book Ion are delivering high-level battery performance to ensure that they are able to meet users’ needs. The batteries in the Galaxy Book series feature best-in-class specifications that improve the usability and portability of the laptops and allow them to charge faster and be used for longer.

Newsroom sat down with the developers responsible for Samsung’s battery research to hear how they went about producing a lightweight laptop that features long enough battery power.

The Slim-down Secret – High-density Energy Packed into a Battery

A battery’s capacity is generally proportional to its physical size - the bigger the battery, the longer you can use the laptop. However, as laptops must offer maximized portability, their batteries cannot be allowed to become overlarge or cumbersome. Thus, the developers at Samsung came up with a solution called ‘high energy density cells’, which allow the largest possible amount of energy to be stored in a limited space. Whereas the energy efficiency of conventional batteries sits at around 650Wh/L, the new battery cells in the Galaxy Book Flex and Galaxy Book Ion boast energy efficiency of around 700Wh/L.

Commenting on the development of the specialized battery packs, engineer SungHoon Kim said, “We undertook several tests to find the perfect balance between weight, size and battery efficiency. With the new batteries, users can use the Galaxy Book Flex and Galaxy Book Ion for up to 20 hours and 22 hours, respectively.”1

Another important factor in battery efficiency is charging speed, which becomes especially important when users are about to go out and find themselves low on battery. To prevent users from being inconvenienced in this way, the developers designed a quick charging algorithm and a large-capacity 65W adaptor that allows the usual charging time of 120 minutes for a 100% charge to be shortened to 90 minutes.

For charging versatility, the ‘easy charging’ feature also allows users to use a smartphone charger and supplementary battery when they need a charge urgently. Engineer Jehwan Lee said “With smartphone chargers being unified with USB-C® functionality across the board, we were able to implement easy charging in the Galaxy Book Flex and Galaxy Book Ion. We tested the easy charging function with a wide range of different supplementary batteries, and ensured that it would facilitate quick and convenient charging when users need it.”

Get More out of Your Laptop with Long-life Algorithm

According to a Samsung internal customer trend survey, users expect their laptops to have an average lifetime of around four years. As a laptop’s battery is a consumable component that gets worn down quickly, extending battery life is key to increasing the overall lifetime of the laptop. 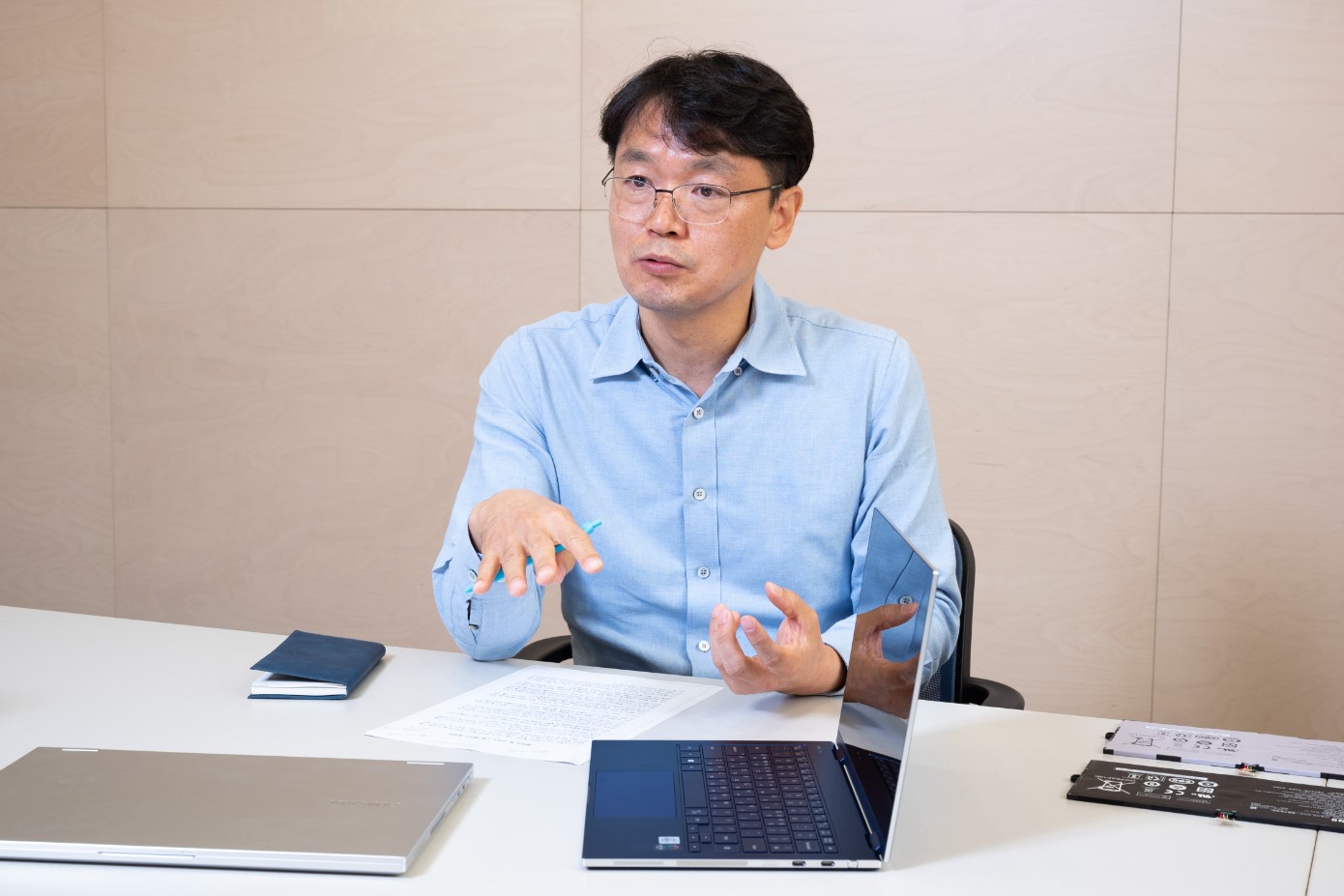 Samsung’s long-life algorithm has contributed to after-use battery capacities being effectively doubled, with the batteries in the Galaxy Book Flex and Galaxy Book Ion now able to retain roughly 80% of their original capacity after charging and discharging 1,000 times. Engineer Jehwan Lee, who was responsible for designing the batteries’ power circuits, explained that “When a battery is aging, it sustains added stress and deterioration even if the tasks it is performing remain unchanged. By monitoring the battery’s status and making adjustments to the charging voltage and current flow when the number of charging cycles is increased, the long-life algorithm contributes to delaying battery deterioration.”

Lee also explained that, “Your laptop’s battery may wear down faster if you keep it constantly connected to the charger. If you keep your laptop plugged in all the time, we recommend activating the ‘Battery Life Extender +’ feature, which prevents the battery from being charged above 85% of its capacity.”

Realizing Wireless PowerShare in a Laptop 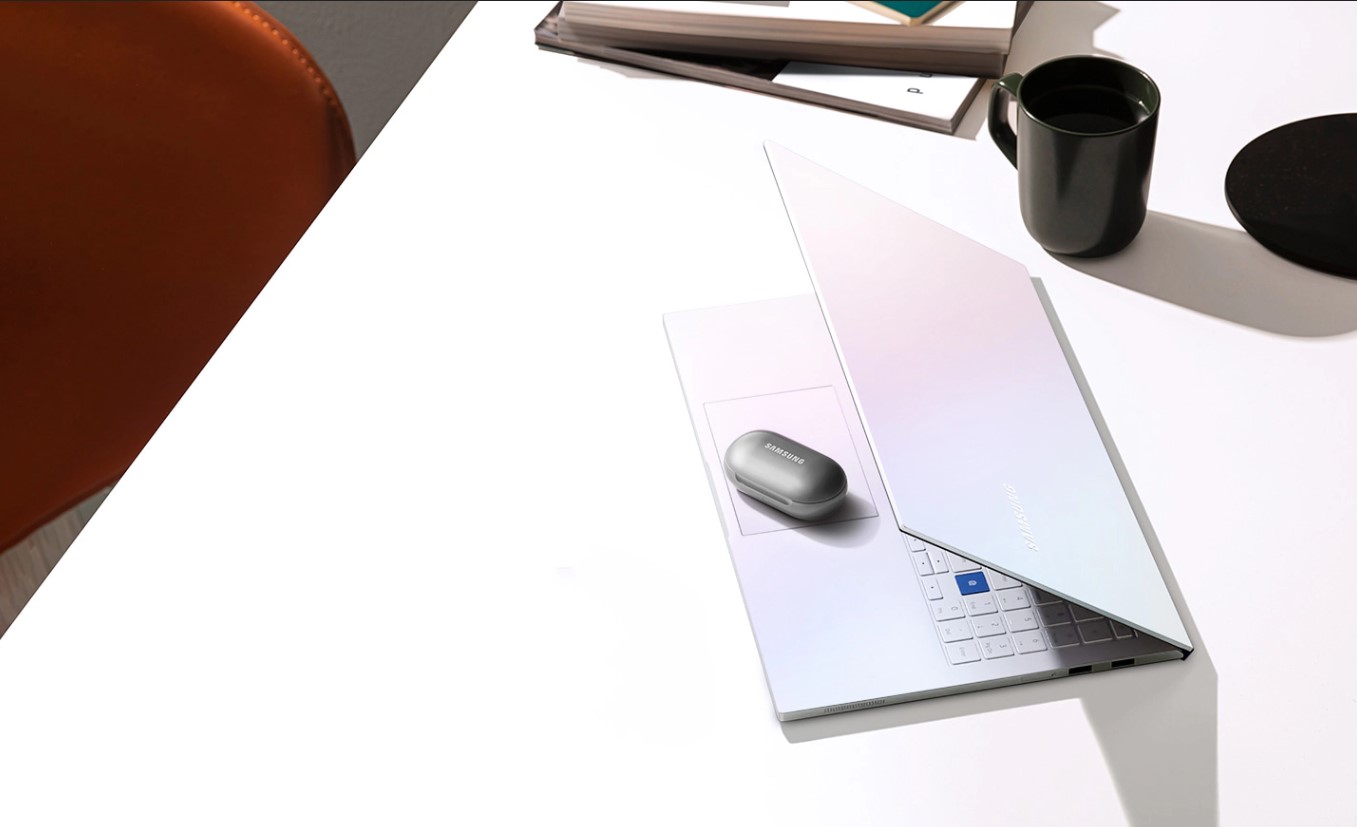 A unique feature of Galaxy Book Flex and Galaxy Book Ion is that they include the Wireless PowerShare feature. Smartphones, wearable devices, wireless earphones and other Qi-compatible devices can all be charged wirelessly when they are placed on the laptop’s touchpad, removing the need for users to carry multiple chargers with them. Hyemi Sung, who was responsible for product planning for the Galaxy Book series, said, “As this is the first laptop series to feature ‘Galaxy’ in its name, we wanted to incorporate a function that would prove useful for users who use multiple Galaxy devices in their day-to-day lives.”

However, incorporating such a feature did not prove straightforward for the developers. Beneath their touchpads, laptops feature a mesh-structured circuit board that detects touch motions, and this aspect of the hardware design obstructed the developers’ ability to incorporate wireless charging into the laptops. Engineer Jehwan Lee explained, “We needed to expand the fine mesh structure in order to improve the efficiency of the wireless charging feature, but doing so decreased the touch accuracy of the touchpad. Following extensive testing done in partnership with the touchpad division, we were eventually able to achieve a balance that maintains functionality in both areas simultaneously.”

Adding convenience often causes other problems to arise, and chief among them in the case of the Galaxy Book series was that of heat. A battery that receives larger quantities of power more quickly will naturally heat up faster, thus requiring the Galaxy Book developers to come up with measures to prevent overheating. 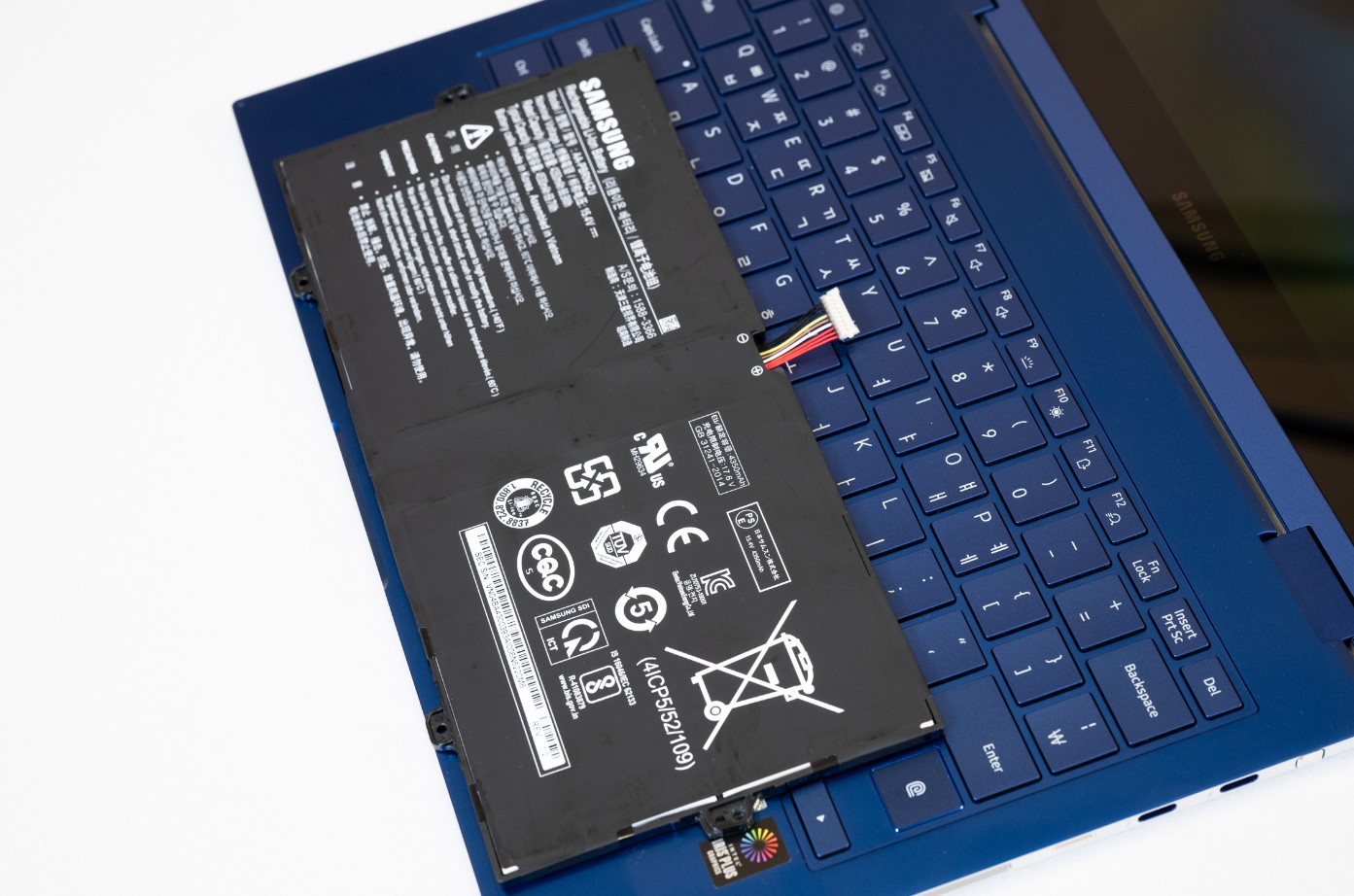 The batteries in the newly released Galaxy Book laptops consist of four cells, all of which are installed with double and triple protection to prevent the spread of heat. Engineer Jehwan Lee explained that, “A temperature sensor located near the charging circuit monitors heat levels, while the system further prevents overheating by alternating between quick charging when the power is off and normal charging when the power is on.”

Engineer Sunghoon Kim explained that “Safety is the most important factor when it comes to developing batteries. All the batteries developed by the Mobile Division undergo an 8-point safety check2 and are designed to remain safe in a wide range of thermal stress environments.”

The battery is an enormously important component when it comes to portable electronic devices. Speaking to this, engineer Jehwan Lee remarked that, “As people expect to be able to use their electronic devices for extended periods of time these days, we’re giving our brand an edge by providing devices with extended battery life.”

Finally, engineer Sunghoon Kim shed some light on the team’s plans for the future, saying that, “Whereas the performance of many contemporary laptop batteries will start to decline after around 1,000 charges, we’d like to develop a battery that maintains performance after 3,000 charges.” 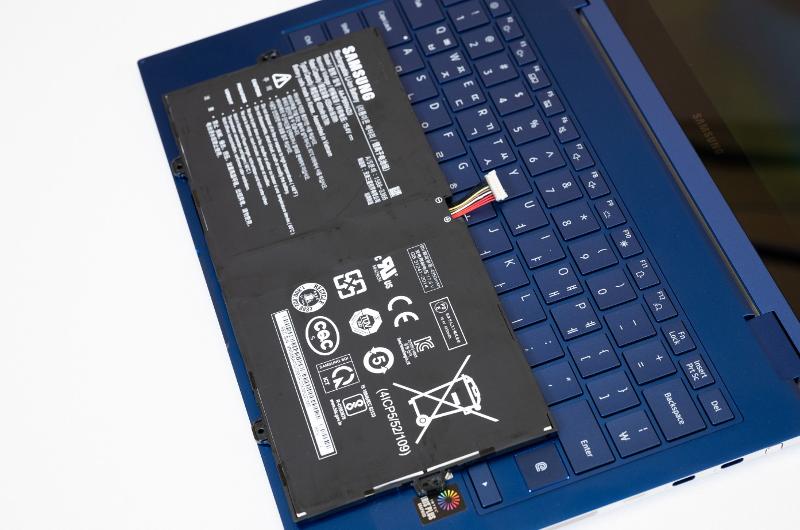 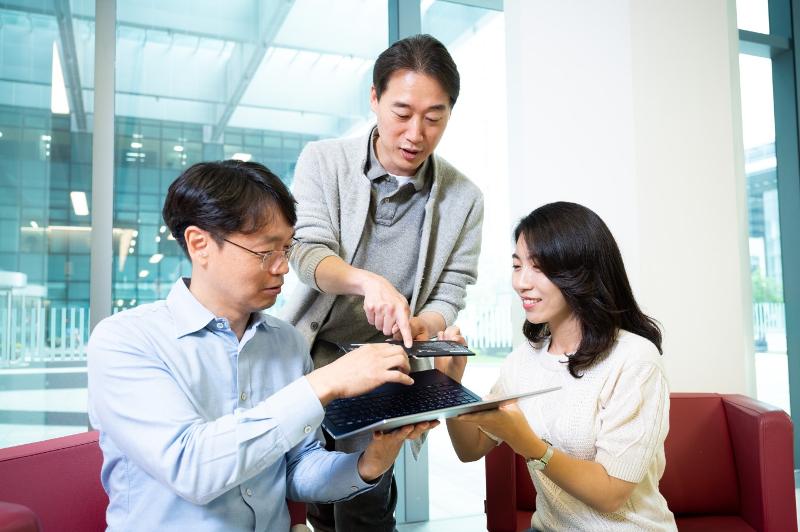 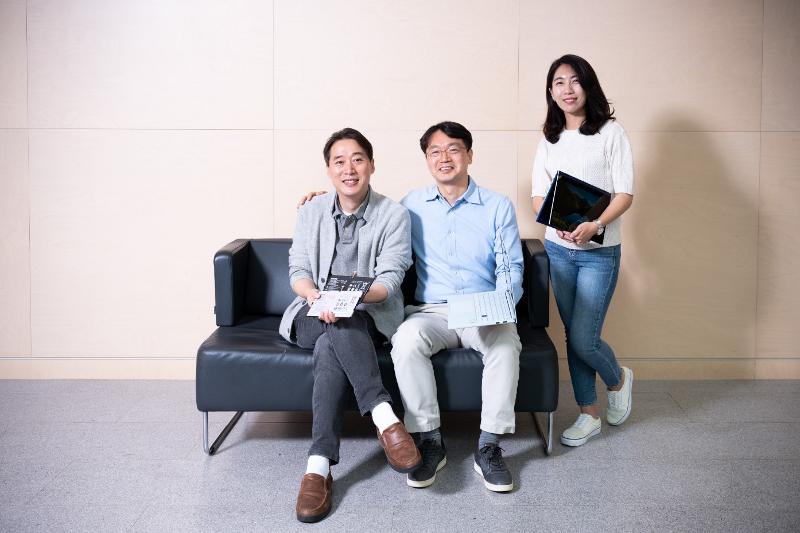 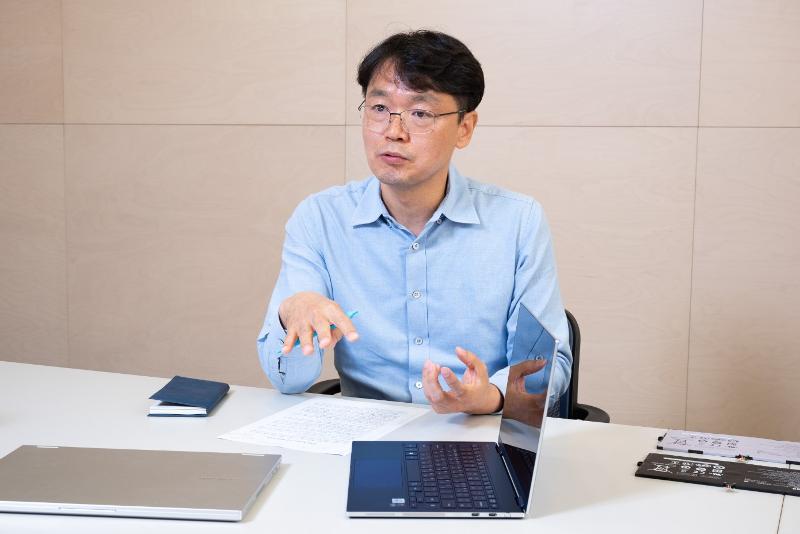 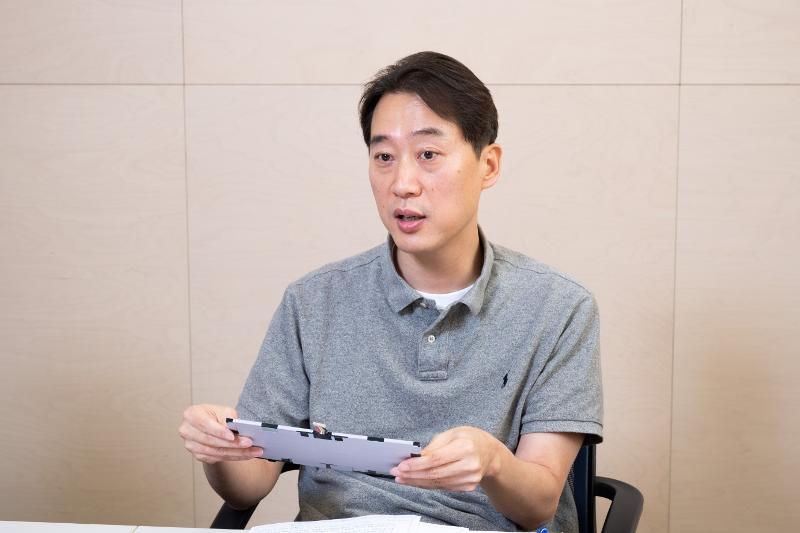 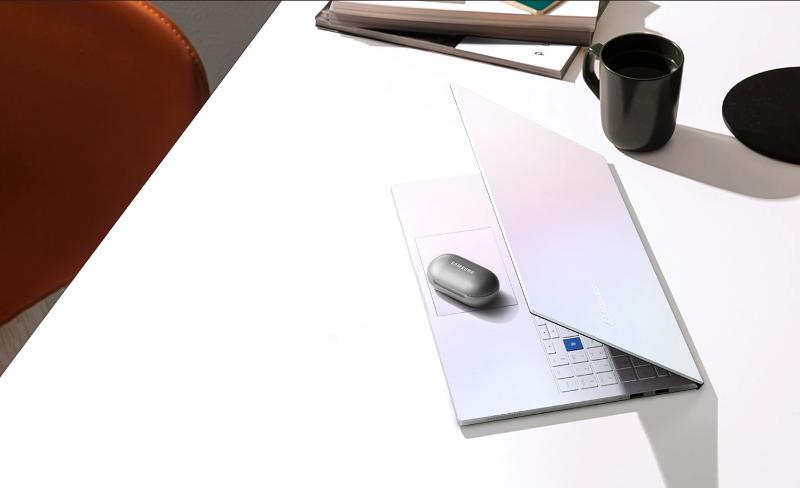