Diving into the Fold: Samsung Experts Reveal How They Turned the Galaxy Z Fold2 into a Multitasking Powerhouse

Hear how the Galaxy Z Fold2 is taking the multitasking to the next level directly from Samsung’s experts.

If the last year has shown us anything about technology, it’s that multitasking on our smartphones isn’t just a cool feature—it’s an essential component of the user experience. In fact, in the new normal of work from home, as much as 74 percent of users have turned to their smartphones for multitasking, according to a recent survey. Now more than ever, the demand for devices with multitasking power is on the rise.

Samsung answered that call with the launch of the Galaxy Z Fold2, building on its legacy of powerful multitasking tools on foldable devices by delivering a suite of new features and UI upgrades. Now that One UI 3.1 has arrived on the device, multitasking is more convenient than ever before.

From improved interactions between apps to a more powerful Multi-Active Window experience, hear how the Galaxy Z Fold2 is taking the foldable user experience to the next level directly from Samsung’s experts.

When it comes to smartphones, no two users have the same needs or use their devices in exactly the same way. To create the ultimate multitasking device that appeals to a wide range of people, Samsung brought users into the development process.

“During the concept building process, we learned that people have different preferences—some like A, and others prefer B,” said Yeonjoo Jwa of Samsung Electronics Basic UX Group. “Acknowledging this, we decided on the direction of the development through user tests.”

By listening to users from the very beginning, Samsung was able to improve multitasking features on the Galaxy Z Fold2, delivering improved app interactions and a more intuitive Multi-Active Window experience.

First introduced on the Galaxy Fold, Multi-Active Window allows users to open three apps at the same time. With the Galaxy Z Fold2, Samsung listened to user feedback to make it an even more powerful multitasking tool.

“The key is to provide a more intuitive interaction and a variety of layouts that adapt to user needs or usage patterns,” said Jwa.

So, when you’re writing an email to a colleague, and need to reference a PowerPoint presentation and website, it’s easier than ever to have all three apps open at the same time. Samsung’s designers combined the Multi-Window Tray and Edge Panel into one, making it convenient to choose to run a single application in full screen, or multiple apps in split screen depending on your needs.

Users can create customized layouts by simply pressing and holding the app and moving it to their desired location in the layout. In addition to the new features introduced at the launch of the Galaxy Z Fold2, the One UI 3.1 updates make Multi-Active Window even more powerful.

Need to respond to an urgent message from your team leader while referencing a document? You can now launch Multi-Active Window from notifications in the Quick Panel by long pressing the notification and dragging and dropping them into the layout to open the apps. 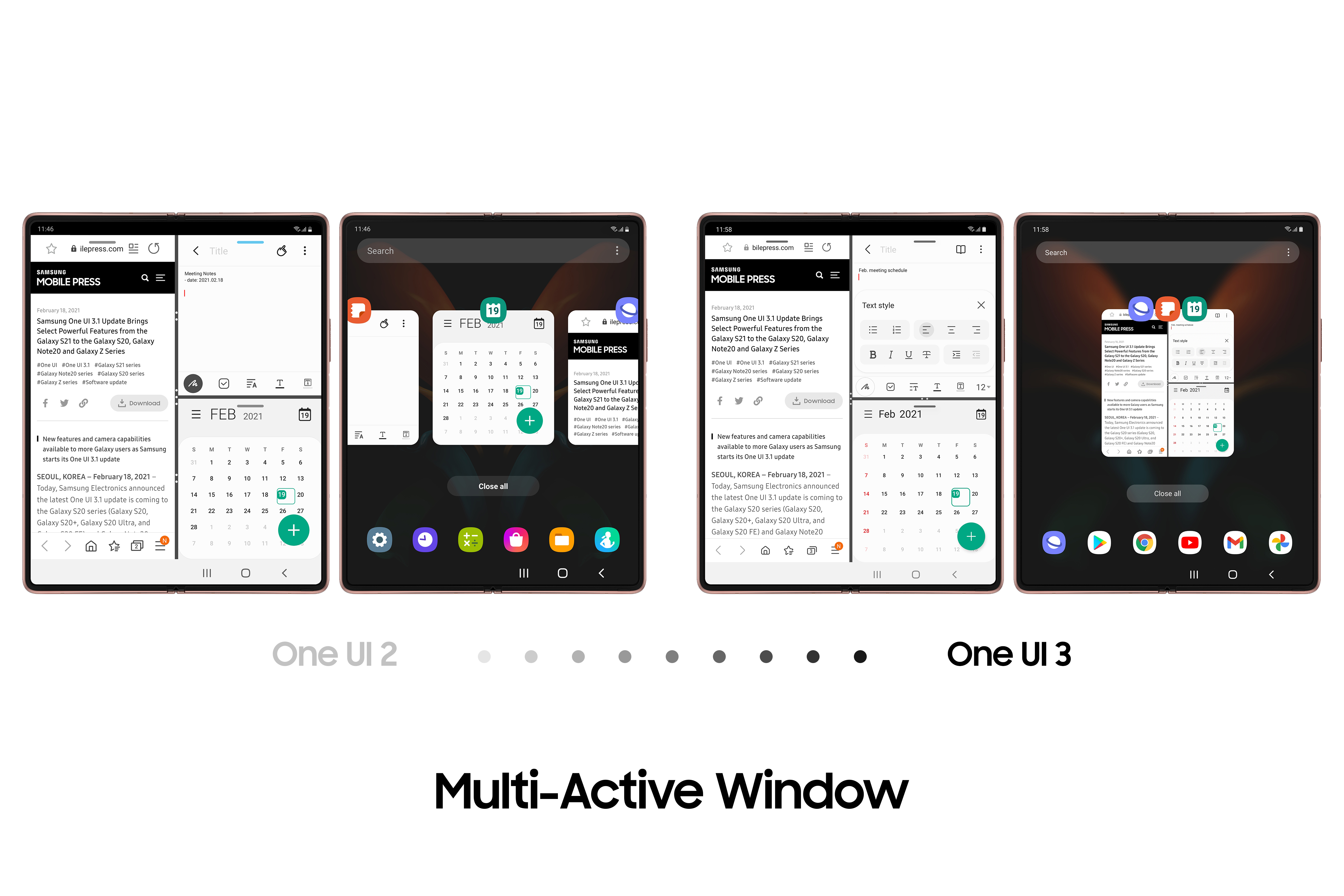 To create a truly powerful multitasking smartphone, Samsung has focused on ensuring that your favorite apps work together seamlessly on the Galaxy Z Fold2.

Dragging and dropping between two apps, for example, has been designed to be intuitive and simple. So, when you need to attach a screenshot to an email, it’s as simple as opening the email and gallery apps side-by-side, then dragging and dropping the image into your message.

The Galaxy Z Fold2 also features the new Split Screen Capture, allowing you to use screenshot while in Multi-Active Window mode, and then select the screenshot of a single app. After capturing your screen while all three apps are open, a window pops up with images from each app. From there you can simply drag the screenshot you want to share into an email, message, or PowerPoint presentation.

With the Screen Layout and zoom function, users can choose between a larger UI interface—easier for reading text—or a layout optimized for viewing more content.

“In the case of the Galaxy Fold, users did prefer using the default viewing setting, which enlarges the Main Screen,” said Joohhwan Kim of Samsung Electronics Basic UX Group. “However, about 23 percent of users adjusted the display setting value so that more content could be viewed on one screen. This is an important point to note, indicating the different needs in the Galaxy Fold series compared to the conventional flagship smartphone products.”

The One UI 3.1 update has also brought features to make using the larger screen more convenient. Both the Cover and Main Screen can now be put on standby with the touch of your palm or a double tap with the ‘Palm touch to turn off screen’ feature. Flex mode also takes advantage of the increased screen real estate when making video calls. 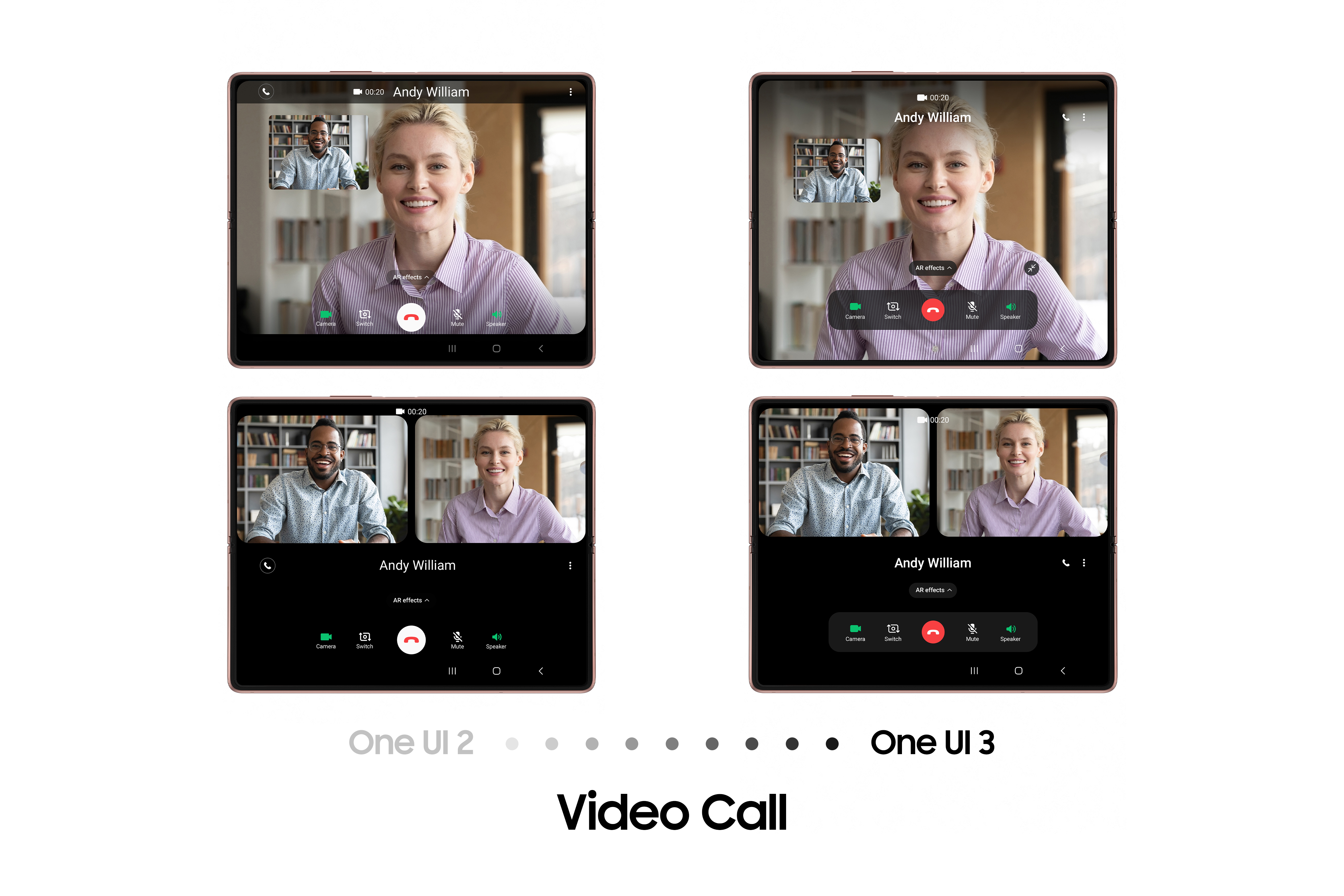 In addition, users can now fill the top half of their display with the video stream, while leaving call controls in the bottom portion for easier viewing.

Samsung’s designers have ensured that every detail on the Galaxy Z Fold2 improves usability for multitasking. The pop-up window design, for example, helps minimize the need to move your fingers across the Main Screen.

The Galaxy Z Fold2 also features improved visual refinements in compatibility mode for apps that do not support continuity, and more UX design considerations have been made to improve the overall foldable experience. 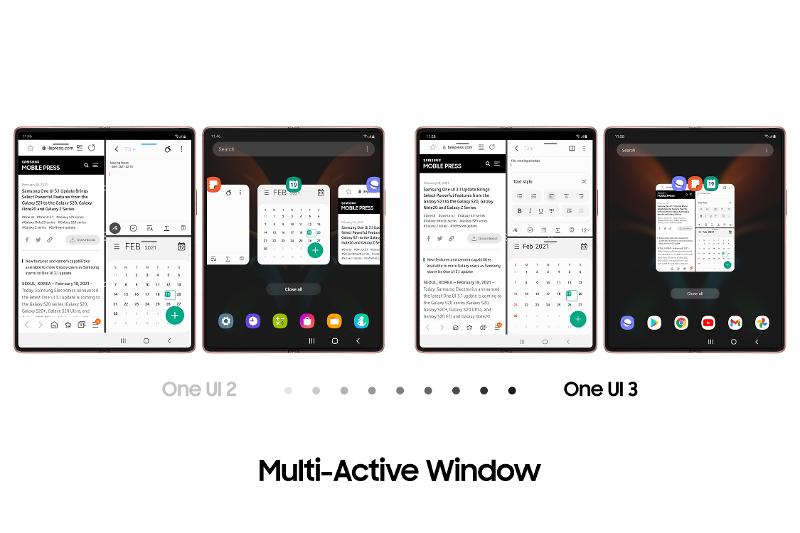 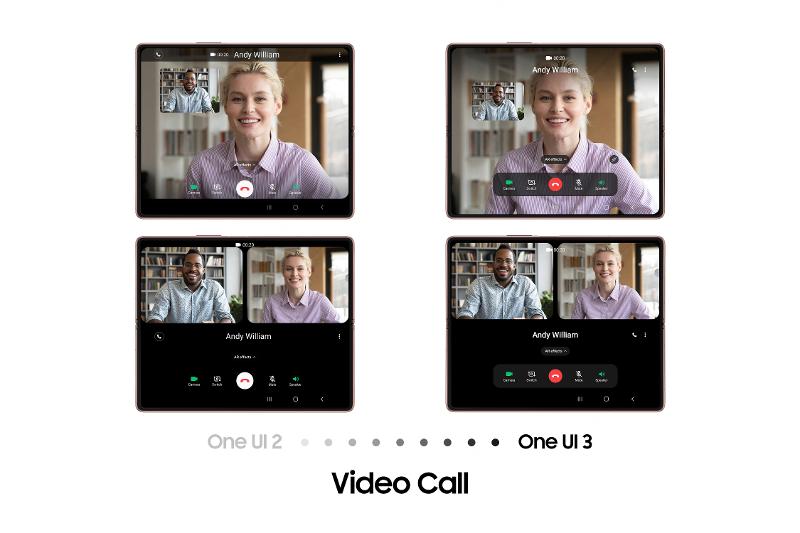 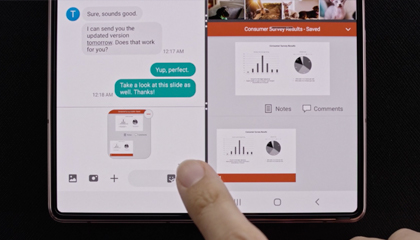 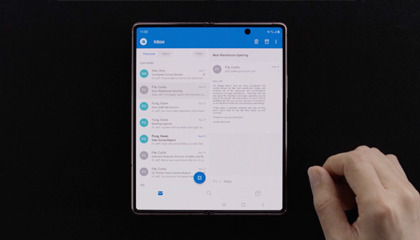 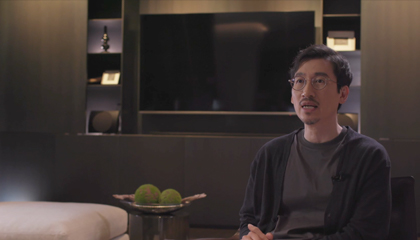 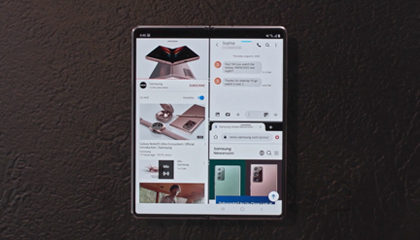